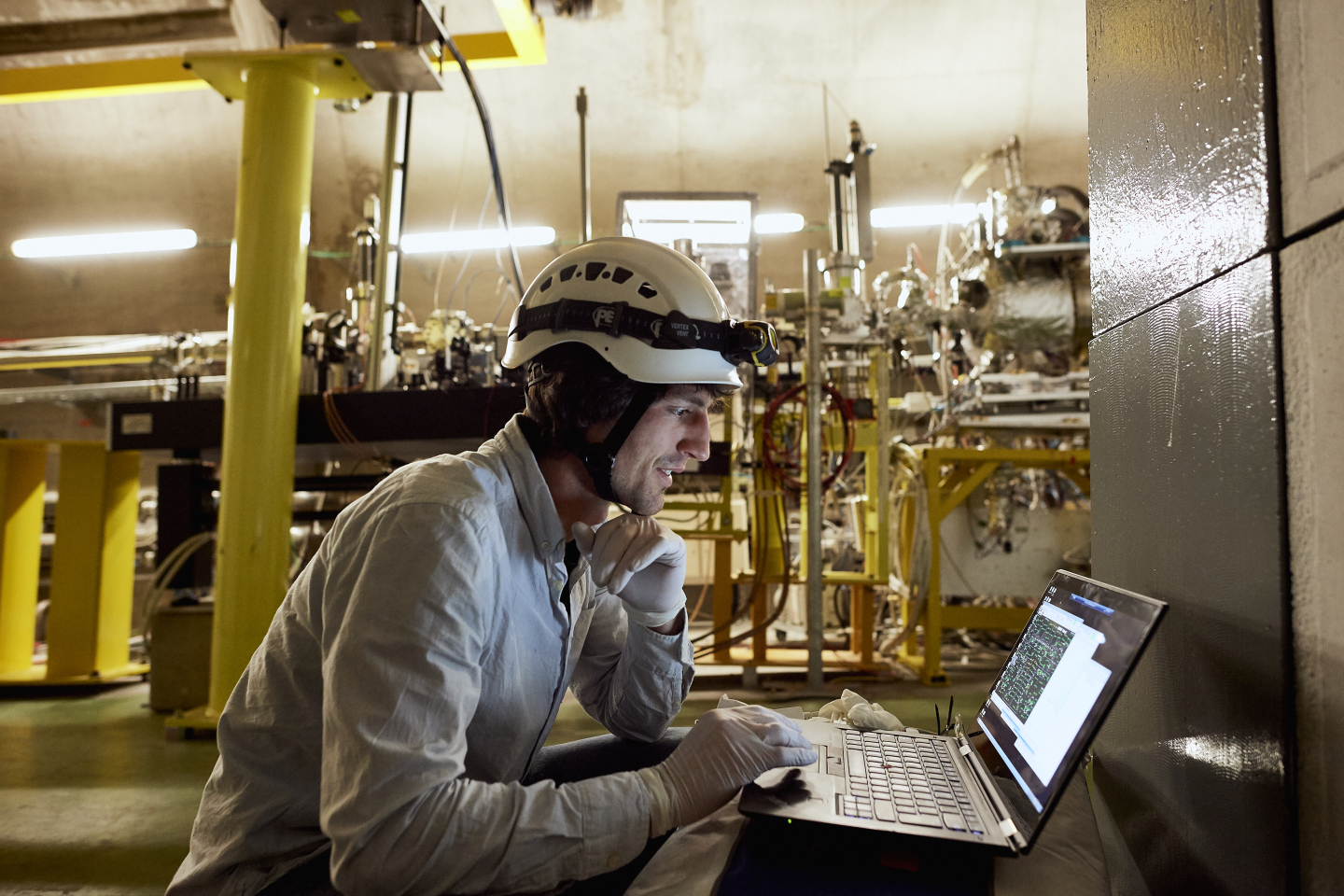 A member of the AWAKE collaboration, from the Max Planck Institute, performing tests in the experiment's underground tunnel (Image: Maximilien Brice/CERN)

The AWAKE collaboration has reached a major milestone; in the final week of CERN's accelerator operations for 2016, it has observed strong modulation of high-energy proton bunches in plasma, signaling the generation of very strong electromagnetic fields. This is a significant step towards the goal of using the proton-driven plasma wakefield technique to accelerate electrons.

The facility was successfully commissioned between June and November and the experiment took its first data in the final week of accelerator operations at CERN in 2016.

"The use of proton bunches to drive wakefields is of particular interest because of the large energy carried by the proton bunches from the CERN SPS and LHC accelerators," says the AWAKE spokesperson, Allen Caldwell, from the Max Planck Institute of Physics in Munich. "It allows for much longer acceleration stages than for other techniques," he points out.

The AWAKE experiment injects a "drive" bunch of protons from CERN’s SPS accelerator into a plasma column created by ionising a gas with a laser. When this bunch interacts with the plasma, it splits into a series of smaller bunches, in a process called self-modulation. As these shorter bunches move through the plasma, they generate a strong wakefield. It is the process of self-modulation that the AWAKE team has observed signals of, and from which it can infer the creation of the wakefield.

The next step, which AWAKE has yet to demonstrate, is to inject a second beam of electrons, the “witness” beam, in the right phase behind the proton beam. This witness beam "feels" the wakefield and is accelerated, just as a surfer accelerates by riding a wave.

The use of plasma to accelerate particles is a potential alternative to traditional accelerating methods that rely on radiofrequency electromagnetic cavities. It has long been known that plasmas are capable of supporting very strong electric fields. The challenge for researchers is to understand the best way to take advantage of this capability in order to create future compact and powerful particle accelerators at reasonable costs. The fields generated by plasma wakefields driven by proton beams could be up to two orders of magnitude higher than fields achievable using conventional radio-frequency cavities.

“To have observed indications for the first time of proton bunch self-modulation, after just a few days of tests is an excellent achievement. It's down to a very motivated and dedicated team," grins Edda Gschwendtner, AWAKE technical coordinator and CERN AWAKE project leader.

"We now plan to study this process in detail in 2017. We hope then to demonstrate the acceleration of electrons in the wake of the proton bunch,” adds Patric Muggli, AWAKE physics coordinator from CERN and the Max Planck Institute for Physics in Munich.

This exciting development, the culmination of three years of intense preparation, opens a new era of particle accelerator development at CERN and worldwide.