The LHC is off to an excellent start in 2016, having already produced the triple the luminosity production of 2015 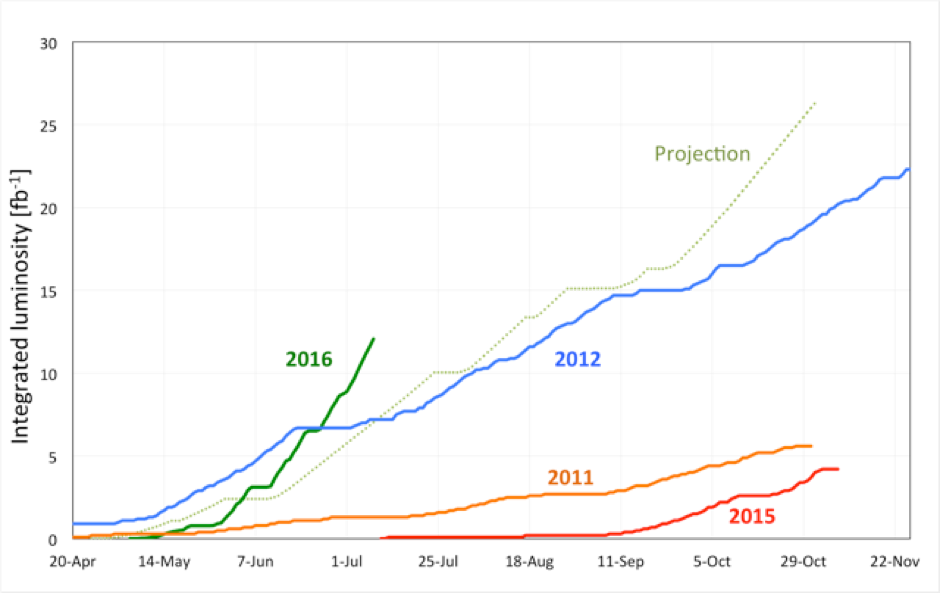 Following the 2015-2016 end of year shutdown, the LHC restarted beam operation in March 2016.  Between the restart and the first technical stop (TS1) in June, the LHC's beam intensity was successively increased, achieving operation with 2040 bunches per beam. The technical stop on 7-8 June was shortened to maximise the time available for luminosity production for the LHC experiments before the summer conferences. Following the technical stop, operation resumed and quickly returned to the performance levels previously achieved. Since then, the LHC has been running steadily with up to 2076 bunches per beam.

Since the technical stop, a total integrated luminosity of more than 9 fb-1 for ATLAS and CMS has been collected – to be added to the 3 fb-1 previously collected in 2016 –  with a production rate significantly exceeding expectations, thanks to the excellent machine availability. In the period following TS1 the LHC was operating for about 80% of the total scheduled time, with only 20% of the time spent recovering from faults. This is an outstanding result for a machine as complex as the LHC and represents an improvement of more than 10% with respect to 2015.  The experience gained during Run 1 has resulted in a significantly improvements to operational efficiency, allowing for very smooth machine cycling. As a result, the total time with colliding beams – the so-called ‘Stable Beams’ efficiency – exceeded 50%. This number is particularly impressive when compared with the previous value of 33% in 2015.

The average duration of stable beams in recent weeks was 13.7 hours, compared to 6.3 hours achieved during the 25 ns run in 2015. The improved reliability of individual systems contributes significantly to the successful exploitation of the machine. This is the result of a systematic effort of hardware groups such as cryogenics, quench protection, power converters, RF, collimation, injection and others to improve the reliability and maintainability of their systems. Of particular note this year is the absence of radiation-induced failures of tunnel electronics, achieved despite the higher radiation levels due to the higher luminosity production thanks to the major effort co-ordinated by the radiation to electronics team.

On 26 June, the LHC has reached its design peak luminosity of 1 x 1034 cm-2s-1 for the first time. This fill was kept in the machine for 37 hours – yet another record – producing 0.7 fb-1 of integrated luminosity before being finally dumped by the operators. This is an impressive result, in particular when considering that the LHC is still operating at 6.5 TeV, below the nominal energy of 7 TeV.

Up until 5 July, 23 fills reached Stable Beams, six of which were dumped by operators after 20 to 30 hours. All other fills were kept in collision until the occurrence of a fault inducing a beam dump. This approach has been chosen by the LHC coordination team thanks to the excellent luminosity lifetimes of more than 30 hours, allowing for productive fills lasting more than one day.

Despite the excellent overall performance, the LHC suffered a few failures after the first technical stop. In particular, a water infiltration in the LHC tunnel resulted in flooding of the service area of LHC Point 3 on 21 June. This affected several systems, particularly the control racks of the nearby collimation system. Several control cables were damaged by the water infiltration and needed to be replaced. Work in the tunnel was delayed due to a problem with the lift in point 3, which was also a consequence of the flood. The overall downtime of the LHC due to this event was about 65 hours.

Moreover, some recurring causes of premature dumps are still being seen. Four beam dumps were induced by beam losses generated by the interaction of the beam with dust particles intercepting the beam trajectory (the so-called UFOs – Unidentified Falling Objects). These events were all observed at the same location in the machine, close to the left-hand side of LHC Point 1. UFOs do not threaten machine safety, but as they reduce machine availability the settings of the beam loss monitors were slightly optimised on 4 July to cope with the losses induced.

Even considering such events, after the excellent start of 2016, new records of luminosity production are expected to be made before the next year-end technical stop.