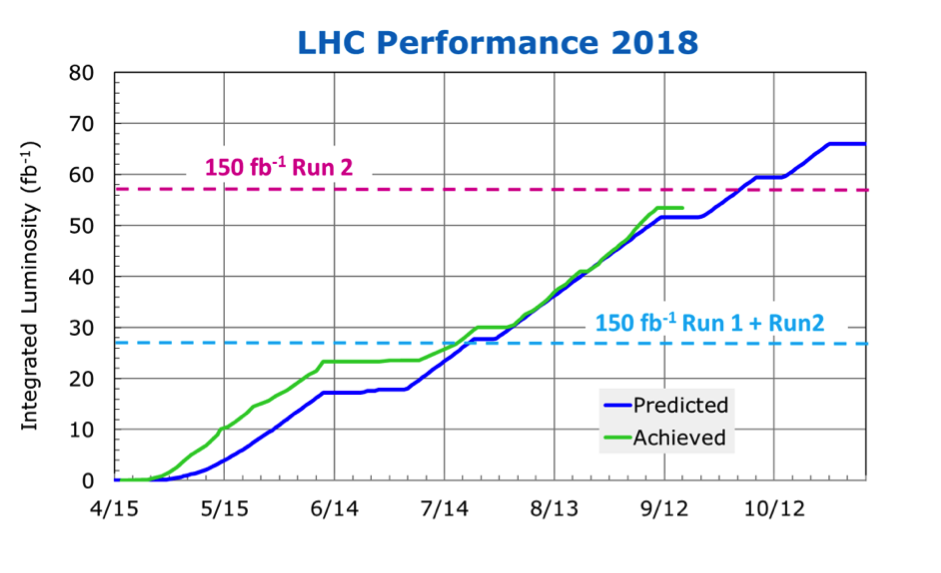 Projected (blue) and delivered (green) integrated luminosity of ATLAS and CMS. The magenta line corresponds to a Run 2 total of 150 fb–1.

The LHC is entering the final days of the four-year-long Run 2. At the end of October, the last protons for Run 2 will circulate inside the LHC. The next protons will be injected only in the spring of 2021!

In the meantime, the LHC had a productive August and early September, bringing the integrated luminosity delivered to ATLAS and CMS to just above 53 fb-1. This is a new yearly record for the LHC, surpassing the 2017 value of 50 fb-1. The machine operated not very far from the maximum luminosity that can be sustained by the cryogenic system that cools the quadrupoles installed around the experiments. With the remaining days of operation, over 60 fb-1 are within reach if the machine availability remains high. The Run 2 total is now at 147 fb-1 and another week of production after the upcoming technical stop should bring us to the Run 2 target of 150 fb-1 delivered to both ATLAS and CMS.

In parallel, the machine delivered 2 fb-1 to LHCb, which operates at a peak luminosity that is roughly five times lower than ATLAS or CMS. LHCb operates with levelled luminosity, meaning that the beams are separated deliberately to maintain a constant collision rate. For this reason, it is not the peak performance of the LHC that counts for LHCb but the amount of time spent with colliding beams. Within the remaining operation period with protons the final LHCb value will approach 2.5 fb-1. ALICE, which operates in a similar mode than LHCb but at significantly lower luminosity, integrated 20 pb-1 so far.

The last month of Run 2 before long shutdown 2 (LS2) will be devoted to a lead-ion run. A few machine shifts were already devoted to setting up the ion optics. Since the ion run is very short, part of the setting up is traditionally performed during the preceding proton run.