Last week, the accumulated integrated luminosity reached the target value for 2016 of 25 fb-1 in both ATLAS and CMS 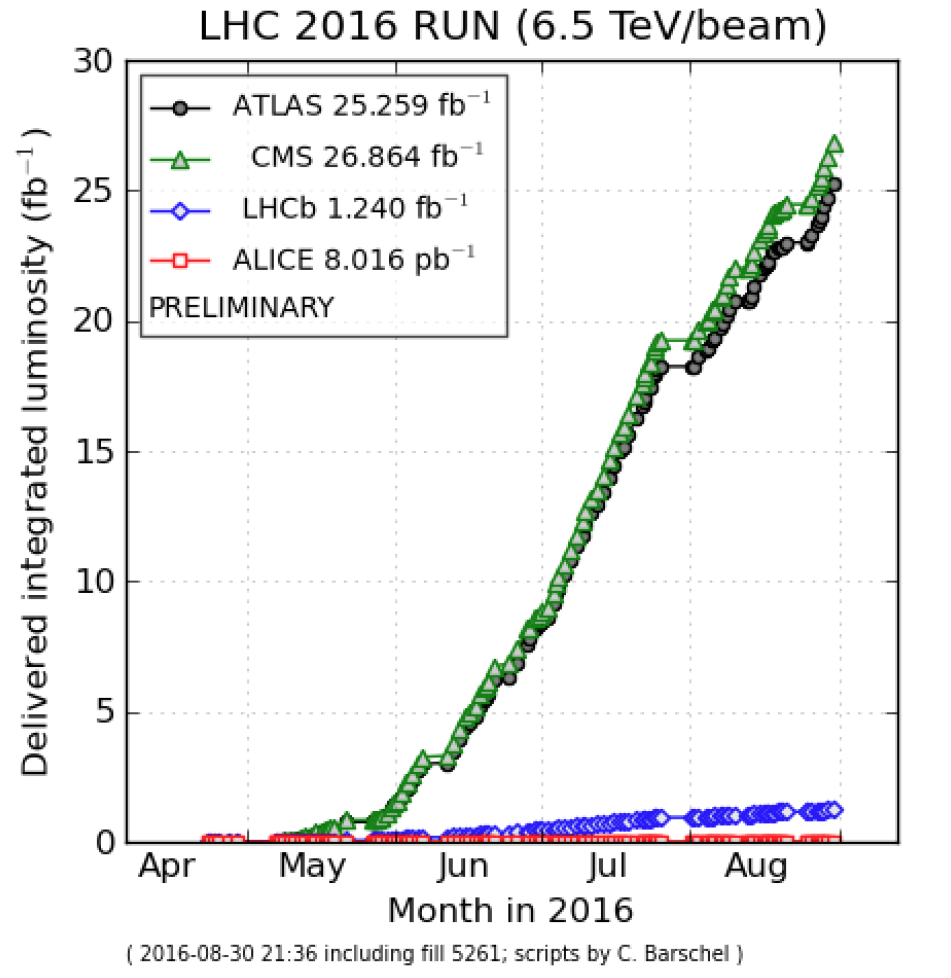 The integrated luminosity delivered to ATLAS and CMS reached (and already passed!) 25 fb-1, the target for the whole year!

Tuesday, 30 August was just a regular day for the 2016 LHC run. However,  on that day, the integrated luminosity delivered to ATLAS and CMS reached 25 fb-1 – the target for the whole year!

How did we get here? A large group of committed scientists and technical experts work behind the scenes at the LHC, ready to adapt to the quirks of this truly impressive machine. After the push to produce as many proton-proton collisions as possible before the summer conferences, several new ideas and production techniques (such as Bunch Compression Multiple Splitting, BCMS) have been incorporated in the operation of LHC in order to boost its performance even further.

Thanks to these improvements, the LHC was routinely operated with peak luminosities 10%-15% above the design value of 1034 cm-2 s-1 in July and August. This is an astounding success, also considering the fact that temporary limitations of the injectors only allow the injection of 2220 bunches per beam instead of the foreseen 2750, and that the LHC’s energy is for the moment still limited to 6.5 TeV instead of the nominal 7 TeV.

One of the main reasons behind this wonderful result is the excellent availability of all the elements of the LHC. In July and August, the average availability was of the order of 80%, with almost 50% of the time spent colliding protons in stable beam conditions.

On 18 August, the ATLAS experiment had to ramp down its magnets due to a control fault in the cryogenics plant, requiring five days to get back to normal conditions. The data recorded without magnetic field is of much less value for the physics analysis, and so the other experiments agreed to reshuffle the LHC schedule and bring forward several machine studies planned for the following week.

Before switching to proton-lead however, there are six weeks of proton-proton physics still ahead and we can look forward to a very successful year for the LHC and its experiments.