New collimators are being installed and tested in the LHC. They will improve its protection and prepare it for higher luminosity in the HL-LHC 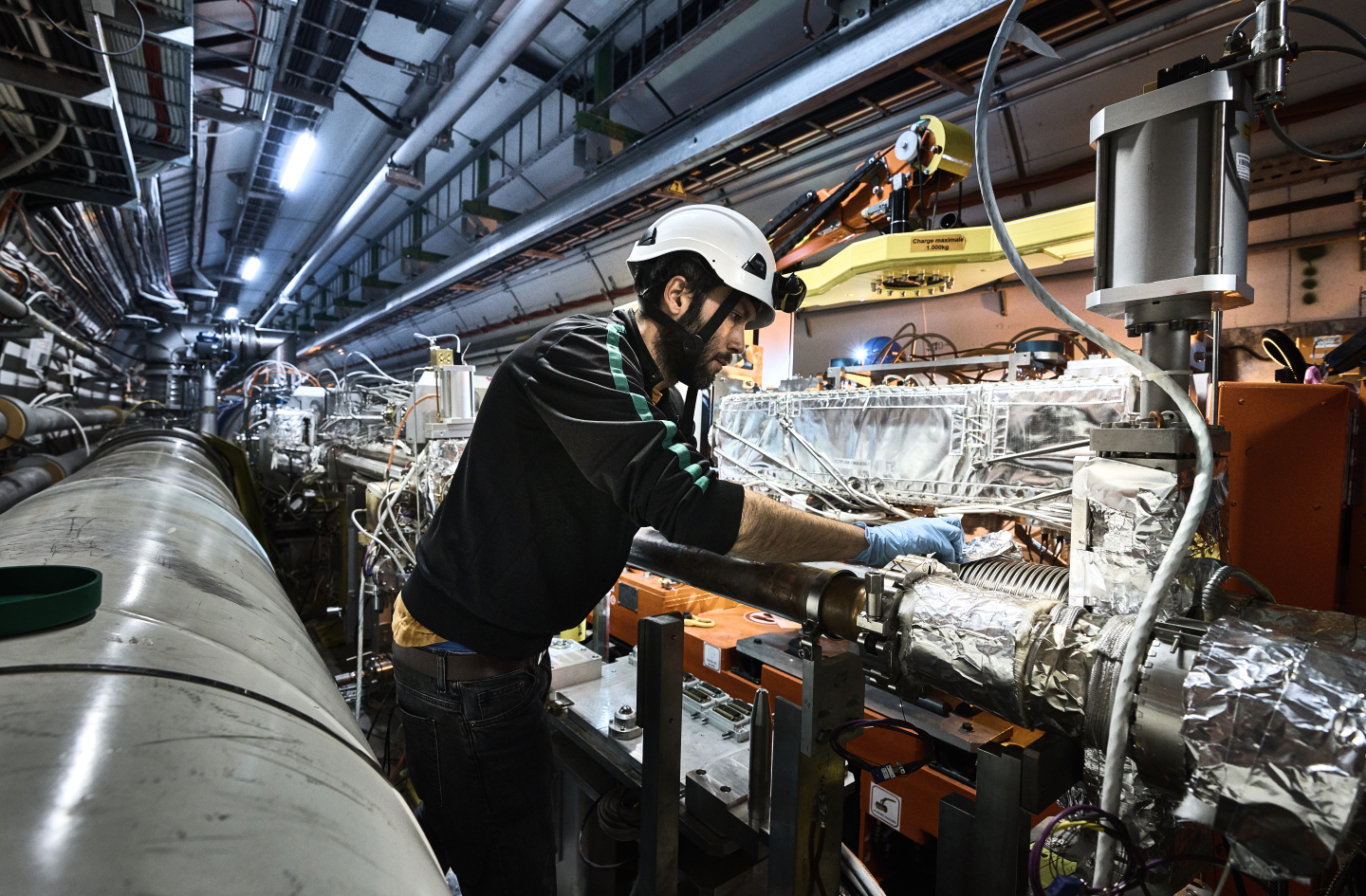 Two wire collimators have been installed in the LHC tunnel on both sides of the ATLAS experiment. (Image: Max Brice, Julien Ordan/CERN)

Collimators are the brave protectors of the LHC. They absorb all the particles that stray from the beam trajectory. These unruly particles may cause damage in sensitive areas of the accelerator, thereby endangering operational stability and machine safety, or quench the LHC’s superconducting magnets. During the current year-end technical stop (YETS), two kinds of recently developed collimators have been installed in the LHC.

The first kind is called TCTW (Target Collimator Tertiary Wire) and will serve a double function. As its name suggests, it has a wire integrated into its jaws, vacuum-brazed into its tungsten-alloy absorbers. A current passing through the wire creates an electromagnetic field, which can be used to compensate the effect of the opposite beam.

“We can look at it as half collimator, half magnet. In addition to cleaning the beam and protecting the downstream equipment, it also acts electromagnetically on the beam to compensate for long-range beam-beam effects. These disturbances are considered to be one of the limitations of the performance of the LHC and the HL-LHC,” explains Iñigo Lamas Garcia from the Sources, Targets and Interactions (STI) group of the Engineering department, who is in charge of the installation of the collimators.

Two of these collimators are now in place at Point 1, one on each side of the ATLAS experiment. This is the second time that wire collimators have been installed in the LHC, following a similar operation at Point 5 during last year’s extended year-end technical stop (EYETS).

This new kind of collimator has been developed for the High-Luminosity LHC project, in collaboration with the Beam Instrumentation and Accelerator Physics groups of the Beams department, as part of the HL-LHC WP5 that is responsible of future collimation upgrades. “We are installing them in the LHC way in advance as proof of concept, to validate their expected performance and benchmark the simulations,” adds Lamas Garcia.

Another type of collimator – a TCPC (Target Collimator Primary Crystal) – has been installed at Point 7. Developed for the HL-LHC project by EN-STI, together with the UA9 collaboration, this jewel of the collimation system offers an alternative way to clean the beam – it uses silicium bent crystals to deflect the halo particles.

“We still have to capture the particles, but, in theory, with the use of crystals we do it in a cleaner and more efficient way, further away from the beam line,” explains Lamas Garcia.

This is a very promising technology for the high-luminosity era of the LHC. Previously, crystal collimators have been installed in the Super Proton Synchrotron (SPS) and in the LHC, where they have been tested during the machine development periods. In 2017, this new system proved to be very effective for Xenon ion beams and this year it will also be tested with lead ions.

A third kind of collimator, a prototype made out of a coated novel material (molybdenum graphite), is the TCSPM (Target Collimator Secondary Pick-up Metallic). It has also been developed by EN-MME and EN-STI.

Its purpose is to reduce the electromagnetic disturbances while delivering an equivalent or even improved cleaning performance. A first prototype of this device, build in-house by EN-MME, was installed at Point 7 during the EYETS and successfully tested with beam in 2017 by the accelerator physics and collimation teams of the Beams department, demonstrating the expected improvements.

For the HL-LHC collimation upgrade, a series production of ten new TCSPM collimators is being launched by EN-STI. They will be installed at point 7 during Long Shutdown 2 (LS2).

All these innovations in the collimator technology stem from the need for a better cleaning performance for the High-Luminosity LHC, when the intensity of the beam will be much higher. These collimation upgrade studies are carried out in a collaborative effort across the Accelerator and Technology sector.