SPS: last injector back up and running 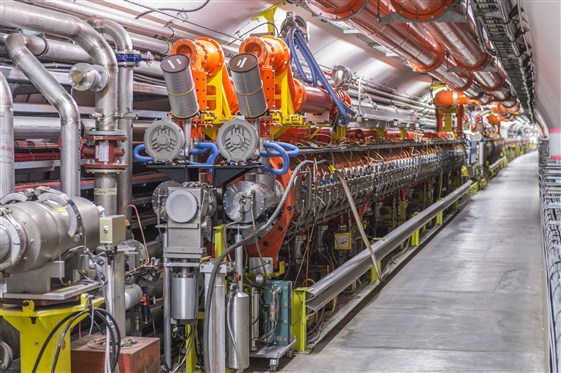 Measuring nearly seven kilometres in circumference, the SPS takes particles from the PS and accelerates them to provide high-energy beams to the LHC. It also feeds the SPS North experimental area where, among others, the Common Muon and Proton Apparatus for Structure and Spectroscopy (COMPASS), and the NA61/Shine, NA62 and NA63 experiments are situated. Since June 2016 the SPS also supplies protons to a new proof-of-principle experiment – the Advanced Proton Driven Plasma Wakefield Acceleration Experiment (AWAKE).

There were quite a few interventions in the SPS during the extended year-end technical stop (EYETS), including a massive de-cabling campaign in the PS Booster and the SPS, which has paved the way for the installation of new equipment for the LHC Injector Upgrade (LIU) project. This project is crucial to the planned increase of luminosity – number of collisions – of the High-Luminosity LHC, the future upgrade of the LHC, operational as from 2025.

Last year issues with the SPS internal beam dump limited the number of particle bunches that could be injected into the Large Hadron Collider (LHC). In response to that, a new beam dump was re-designed, produced, and successfully installed in the second week of March. This will allow the SPS to reach its full performance again for this year’s run.