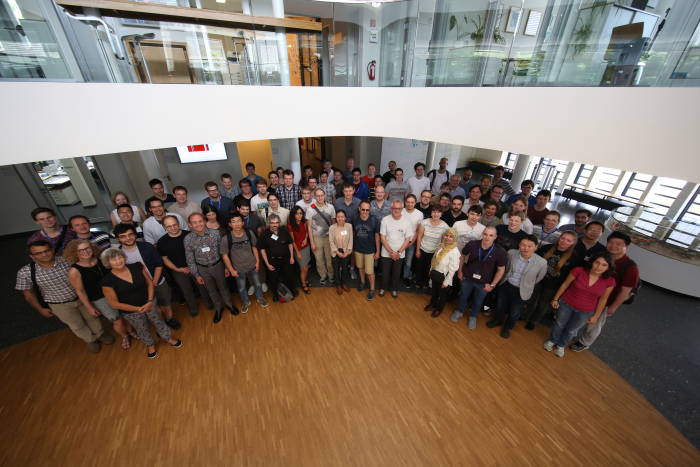 The CERN Accelerator School (CAS) and DESY held a jointly-organised specialised course on Free-Electron Lasers and Energy Recovery Linacs (FELs and ERLs) in Hamburg, Germany, from 31 May to 10 June 2016.

The course was held in the Hotel Scandic Emporio in Hamburg and was attended by 68 participants of 13 nationalities, coming from countries as far away as China, Iran and Japan.

The intensive programme comprised 44 lectures and one seminar. Following introductory lectures on electromagnetism, relativity and synchrotron radiation issues, the basic requirements of linacs and ERLs were discussed. Detailed lectures on the theory of FEL science followed. Undulators and the process of lasing and seeding were covered in some detail along with lectures on various beam dynamics and beam control issues. Case studies, for which seven hours were allocated, completed the academic programme. For these, the students were divided into small groups and tasked with completing the basic design of an FEL or an ERL, before presenting their results on the final afternoon. An all-day visit to DESY with talks in the morning and visits to the facilities in the afternoon was also included in the programme.

In addition, the students had the opportunity to take part in a boat trip in Hamburg harbor and attend a dinner with an exclusive visit to the Miniatur Wunderland.

Next year, CAS will be holding a specialised course on Beam Injection, Extraction and Transfer from 10 to 19 March 2017 in Erice, Italy; a specialised course in collaboration with Max IV Laboratory on Vacuum for Particle Accelerators from 6 to 16 June 2017 in Lund, Sweden; an Advanced Accelerator Physics course in the UK in late summer; and a Joint School on RF Technology at Hayama, Shonan Village Center, Japan, in late autumn.

Further information on forthcoming CAS courses can be found on the CAS website.