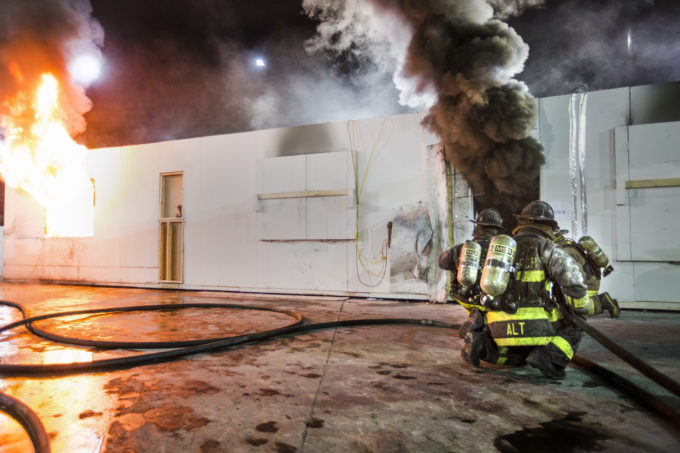 One of the UL FSRI’s model houses is set alight... in the interest of science. (Photo: ©UL FSRI)

For around ten years, the Underwriters Laboratories Firefighter Safety Research Institute (UL FSRI) has been carrying out scientific research on the various techniques used by firefighters in the United States and around the world. This research has focused on evaluating the effectiveness and safety of current practices worldwide with the aim of developing even better techniques. In many cases the research has shown that a combination of techniques gives the best results.

Art Arnalich, who has worked with fire brigades in the United States and Europe and is now a member of CERN’s Fire Brigade, has actively participated in this research since 2013. His knowledge of the techniques currently deployed on both sides of the Atlantic is much appreciated. “The UL FSRI laboratory has several life-size model houses that the researchers can set alight for their tests,” explains Art Arnalich. “They have used them, in particular, to study the various tactics used to attack a fire. Some fire brigades prefer to fight fires from inside a building, others from the outside. But the researchers have shown that a combined internal/external approach, combined with the use of a ventilator at the entrance to the building to repel the smoke, is much more effective. Their work is really innovative; it’s helping to improve the techniques used by firefighters all over the world!”

In the framework of the collaboration with UL FSRI, Art Arnalich and Javier Cuadrado, another Spanish-speaking firefighter from the CERN Fire Brigade, have worked in cooperation with eight Spanish-speaking fire brigades from all over the world on the Spanish translation of Governors Island, a free online training programme that has already been followed by more than 30,000 firefighters worldwide. In addition, the Spanish audio for the training programme was recorded at CERN, with help from the Audiovisual Production service.

From 18 to 23 April, Art also participated as a guest instructor representing CERN at FDIC International 2016 in Indianapolis (United States), the world’s biggest conference on firefighting techniques, which this year was attended by over 32,000 participants. Art gave a lecture on the differences between European and American techniques and the benefits of a combined approach, as demonstrated by UL FSRI. “At CERN, scientific research is part of our daily life,” concludes Art, “and we know how essential it is for making progress. It’s important for the firefighting world to be able to rely on sound research based on scientific data.”