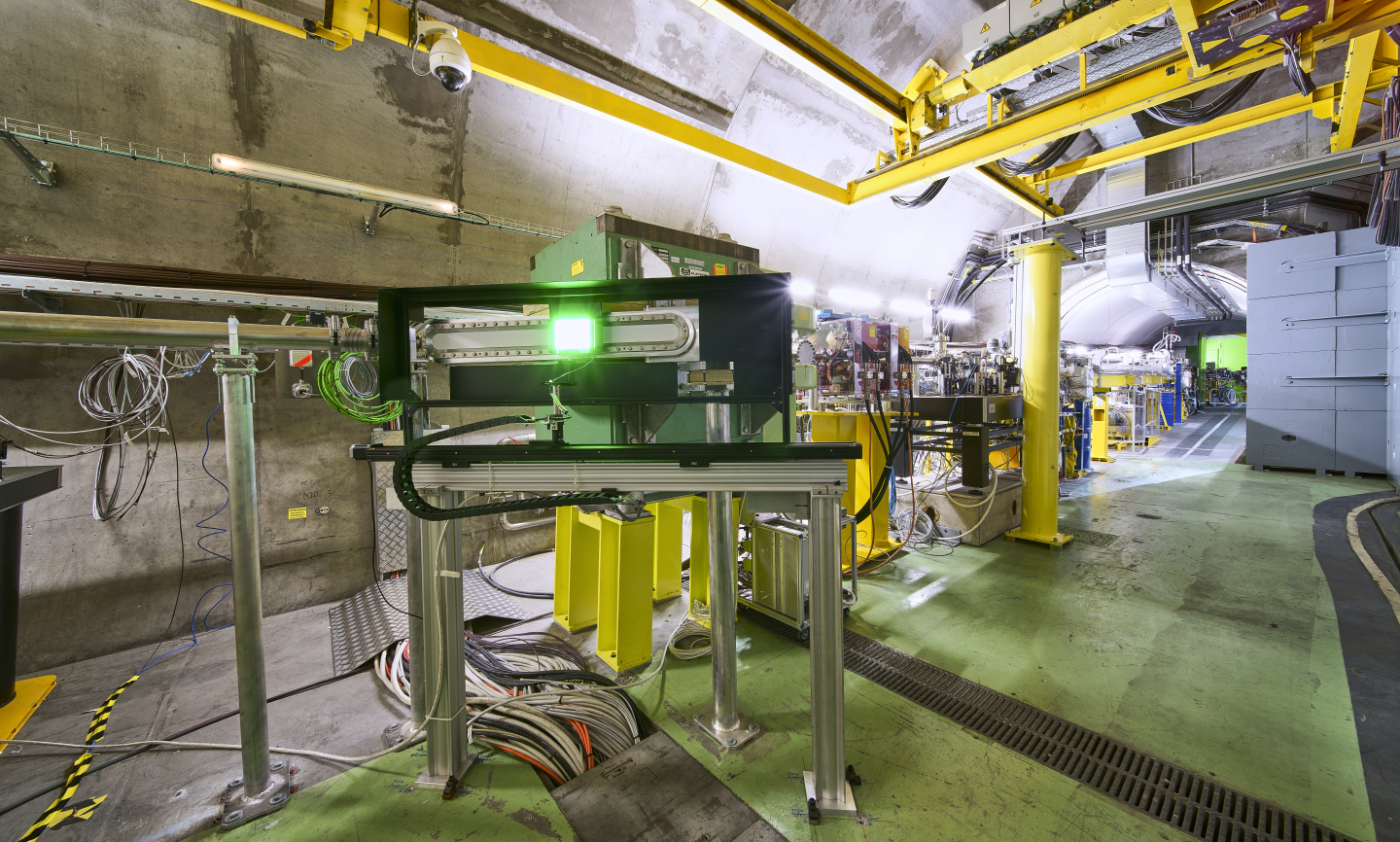 The final part of the AWAKE experimental facility, with the accelerating plasma cell and the scintillating screen used to detect the accelerated electrons and infer their energy. (Image: Maximilien Brice, Julien Ordan/CERN)

Early in the morning on Saturday, 26 May 2018, the AWAKE collaboration at CERN successfully accelerated electrons for the first time using a wakefield generated by protons zipping through a plasma. A paper describing this important result was published in the journal Nature on 29 August. The electrons were accelerated by a factor of around 100 over a length of 10 metres: injected at an energy of around 19 MeV, they reached an energy of almost 2 GeV.

AWAKE (“Advanced WAKEfield Experiment”) is a proof-of-principle "Research and Development" project investigating the use of protons to drive plasma wakefields for accelerating electrons. While traditional accelerators use radio-frequency cavities, in wakefield accelerators, the particles get accelerated by “surfing” on top of a plasma wave (or wakefield).

“Wakefield accelerators have two different beams: the beam of particles that is the target for the acceleration, known as ‘witness beam’, and the beam that generates the wakefield, known as the ‘drive beam’,” explains Allen Caldwell, spokesperson of the AWAKE collaboration. Previous examples of wakefield acceleration have relied on using electrons or lasers for the drive beam. AWAKE is the first experiment to use protons for the drive beam. “Wakefield accelerators relying on protons for their drive beams can accelerate their witness beams for a greater distance, consequently allowing them to attain higher energies,” adds Caldwell.

Drive-protons from the SPS are injected into AWAKE’s plasma cell containing vaporised Rubidium. A laser pulse transforms the Rubidium gas into a plasma by ejecting electrons from the gas atoms. As the drive beam of positively charged protons travels through the plasma, it causes the negatively charged electrons within the plasma to oscillate in a wavelike pattern, much like a ship moving through the water generates oscillations in its wake. Witness-electrons are then injected and “ride” the plasma wave to get accelerated.

AWAKE has made rapid progress since its approval in 2013. Civil-engineering works for the project began in 2014, and the plasma cell was installed in early 2016 in the tunnel formerly used by part of the CNGS facility at CERN. A few months later, the first drive beams of protons were injected into the plasma cell to commission the experimental apparatus, and a proton-driven wakefield was observed for the first time in late 2016. In late 2017, the electron source, electron beam line and electron spectrometer were installed.

AWAKE will continue testing the wakefield-acceleration of electrons for the rest of 2018. “We are looking forward to obtaining more results from our experiment to demonstrate the scope of plasma wakefields as the basis for future particle accelerators,” explains Edda Gschwendtner. Although still at a very early stage of development, the use of plasma wakefields could drastically reduce the sizes, and therefore the costs, of the accelerators.