Congratulations to SuperKEKB for “first turns" 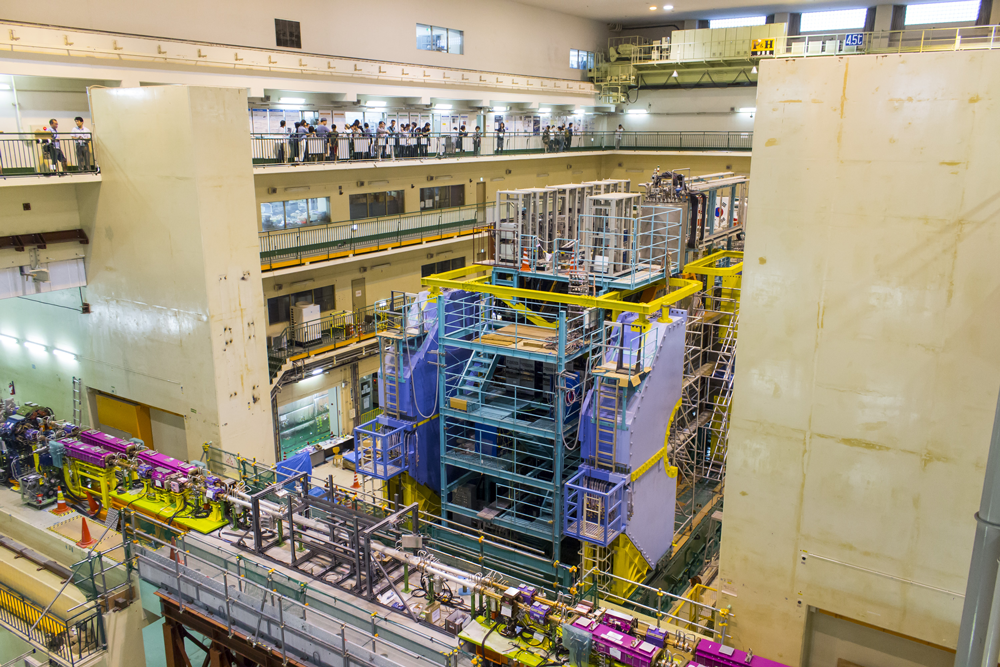 View of the SuperKEKB collision point in autumn 2015. The accelerator beam line is now covered with a concrete shield. The Belle II detector can be seen in the background. (Image: <a href="http://www.kek.jp/en/NewsRoom/Release/20160302163000/">KEK</a>)

Congratulations to the SuperKEKB electron-positron collider in Tsukuba, Japan. On 10 February, the collider succeeded in circulating and storing a positron beam moving close to the speed of light through more than a thousand magnets in a narrow tube around the 3-kilometre circumference of its main ring. Then, on 26 February, it succeeded in circulating and storing an electron beam around its ring of magnets in the opposite direction.

The achievement of "first turns", which means storing the beam in the ring through many revolutions, is a major milestone for any particle accelerator.

SuperKEKB, along with the Belle II detector, is a facility designed to search for New Physics beyond the Standard Model by measuring rare decays of elementary particles such as beauty quarks, charm quarks and tau leptons.

The Belle II detector at SuperKEKB was designed and built by an international collaboration of more than 600 physicists from 23 countries. This collaboration is working closely with SuperKEKB accelerator experts to optimize the machine performance and backgrounds.

At the same time as first turns were achieved, the BEAST in its cave at Tsukuba Hall awakened from its slumber. The BEAST II detector is a system of detectors designed to measure beam backgrounds of the SuperKEKB accelerator. The parasitic radiation produced by electromagnetic showers when the beam collides with the walls of the vacuum pipe, not only obscure the signals that we wish to observe, but can also damage the detector. Therefore, when operating the new accelerator, these beam backgrounds must be well understood.

The BEAST II detector will collect data in the unique environment produced by SuperKEKB’s first beams, thus paving the way to allow Belle II to safely roll into the beam in 2017.

The LHC racks up records

CMS on the lookout for new physics