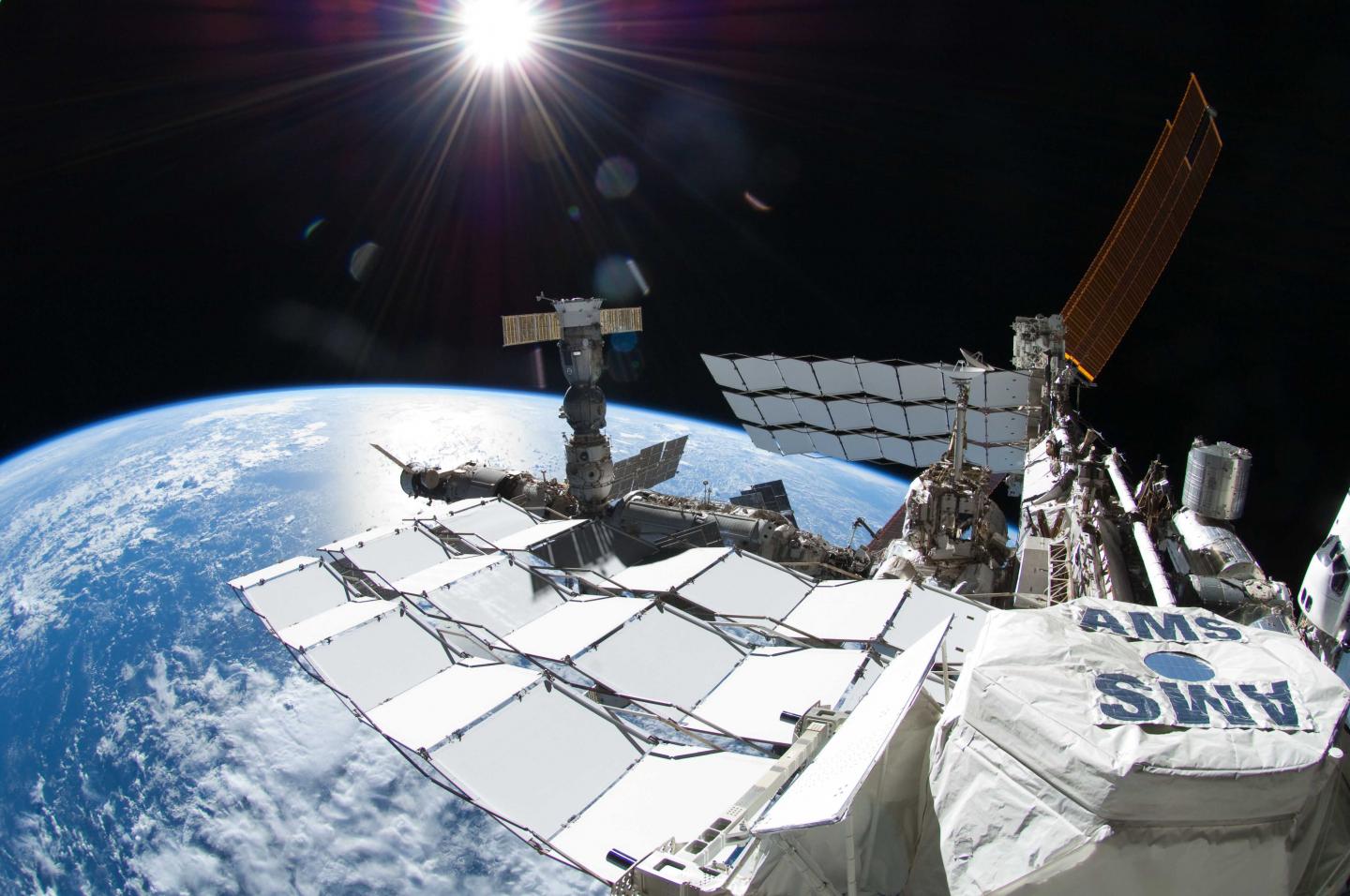 The AMS detector on the International Space Station (Image: NASA)

Ever since astronauts attached the 7.5 tonne AMS detector to the International Space Station in May 2011, the space-based magnetic spectrometer, which was assembled at CERN, has collected data on more than 150 billion cosmic rays – charged particles that travel through space with energies up to trillions of electron volts. It’s an impressive amount of data, which has provided a wealth of information about these cosmic particles, but remarkably, as the spokesperson of the AMS team Sam Ting has previously noted, none of the AMS results were predicted. In a paper just published in Physical Review Letters, the AMS team reports measurements of heavy primary cosmic rays that, again, are unexpected.

Primary cosmic rays are produced in supernovae explosions in our galaxy, the Milky Way, and beyond. The most common are nuclei of hydrogen, that is, protons, but they can also take other forms, such as heavier nuclei and electrons or their antimatter counterparts. AMS and other experiments have previously measured the number, or more precisely the so-called flux, of several of these types of cosmic rays and how the flux varies with particle energy and rigidity – a measure of a charged particle’s momentum in a magnetic field. But until now there have been no measurements of how the fluxes of the heavy nuclei of neon, magnesium and silicon change with rigidity. Such measurements would help shed new light on the exact nature of primary cosmic rays and how they journey through space.

In its latest paper, the AMS team describes flux measurements of these three cosmic nuclei in the rigidity range from 2.15 GV to 3.0 TV. These measurements are based on 1.8 million neon nuclei, 2.2 million magnesium nuclei and 1.6 million silicon nuclei, collected by AMS during its ﬁrst 7 years of operation (19 May 2011 to 26 May 2018). The neon, magnesium and silicon fluxes display unexpectedly identical rigidity dependence above 86.5 GV, including an also unexpected deviation above 200 GV from the single-power-law dependence predicted by the conventional theory of cosmic-ray origin and propagation. What’s more, the observed rigidity dependence is surprisingly diﬀerent from that of the lighter primary helium, carbon and oxygen cosmic rays, which has been previously measured by AMS.

The new and surprising data is likely to keep theorists busy rethinking and reworking current cosmic-ray models. “Our previous observations have already generated new developments in cosmic-ray models. The new observations will provide additional challenges for the new models,” says Ting. And if the data that the detector is currently taking and sending back to CERN for analysis – after a successful series of spacewalks that has extended its lifetime – throws up more surprises, theorists are likely to become even busier.

Watch the video below and relive the drama of the complex spacewalks that have extended the remaining lifetime of the AMS detector to match that of the International Space Station itself.

Read more about the spacewalks and the previous AMS results in this CERN Courier article.