Raising the (G)bar for antimatter exploration

What is the effect of gravity on antimatter? A new experiment at CERN is preparing to join the quest to find the answer to this question in physics 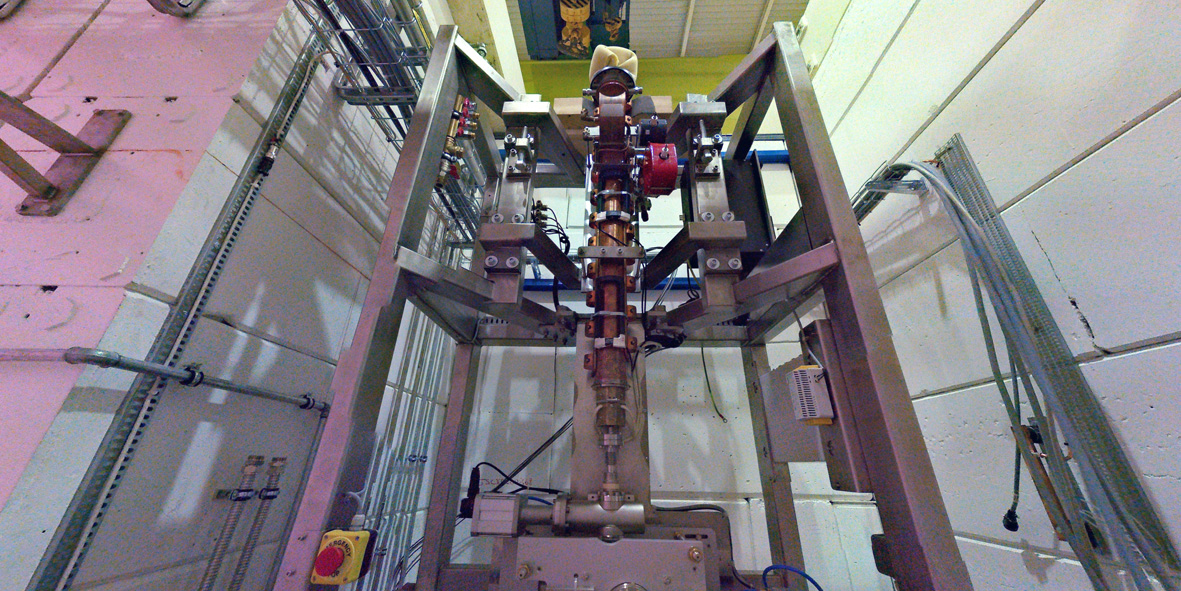 Installation of the GBAR linac in its shielding bunker. The electrons accelerated to 10 MeV toward a target will produce the positrons that are necessary to form antihydrogen with the antiprotons coming from the ELENA decelerator. (Image: Max Brice/CERN)

The absence of antimatter in the universe is a long-standing jigsaw puzzle in physics. Many experiments have been exploring this question by finding asymmetries between particles and their antimatter counterparts.

GBAR (Gravitational Behaviour of Antihydrogen at Rest), a new experiment at CERN, is preparing to explore one aspect of this puzzle – what is the effect of gravity on antimatter? While theories exist as to whether antimatter will behave like matter or not, a definitive experimental result is still missing.

GBAR will measure the effect of gravity on antihydrogen atoms. Located in the Antiproton Decelerator (AD) hall, GBAR is the first of five experiments that will be connected to the new ELENA deceleration ring. On 1 March, the first component of the experiment was installed – a linear accelerator (linac). In sharp contrast to the LHC’s chain of big accelerators and fast particles, the AD world of antimatter is small and its particles are as slow as they come. The GBAR linac is only 1.2 metres long and it will be used to create positrons, the antimatter equivalent of electrons.

The experiment will use antiprotons supplied by ELENA and positrons created by the linac to produce antihydrogen ions. They consist of one antiproton and two positrons, and their positive charge makes them significantly easier to manipulate. With the help of lasers, their velocity will be reduced to half a metre per second. This will allow them to be directed to a fixed point. Then, trapped by an electric field, one of their positrons will be removed with a laser, which will make them neutral again. The only force acting on them at this point will be gravity and they will be free to make a 20-centimetre fall, during which researchers will observe their behaviour.

The results might turn out to be very exciting. As the spokesperson of GBAR, Patrice Pérez, explains: “Einstein’s Equivalence Principle states that the trajectory of a particle is independent of its composition and internal structure when it is only submitted to gravitational forces. If we find out that gravity has a different effect on antimatter, this would mean that we still have a lot to learn about the universe.”

Five other experiments are based at the Antiproton Decelerator, two of which – AEGIS and ALPHA – are also studying the effect of gravity on antimatter.