LHC collides protons with lead ions for the first time 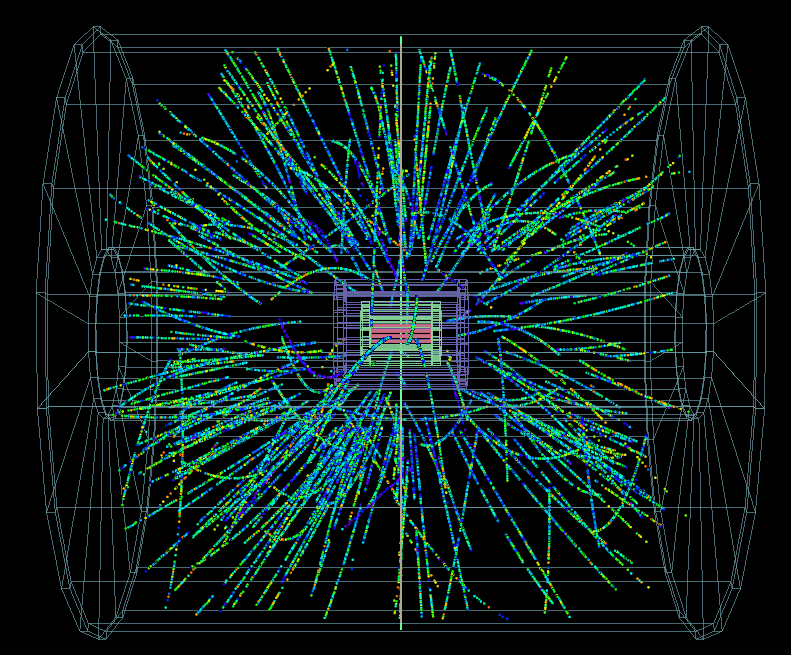 A proton collides with a lead nucleus, sending a shower of particles through the ALICE detector. The ATLAS, CMS and LHCb experiments also recorded collisions (Image: ALICE/CERN)

At 1.26am today the Large Hadron Collider (LHC) collided protons with lead ions for the first time.

The switch to colliding different types of particle, rather than like with like, presents technical challenges. "First of all, the collisions are asymmetric in energy which presents a challenge for the experiments," says accelerator physicist and lead-ion team leader John Jowett.  "At the accelerator level we don’t really see the difference in particle size but the difference in the beam size and the fact that the beam sizes change at different rates may affect how they behave in collisions."

There are further challenges. The LHC usually accelerates two beams of protons in opposite directions – from 0.45 TeV to 4 TeV – before they collide at a total energy of 8 TeV. Radiofrequency (RF) cavities – accelerator components containing electromagnetic fields that kick particles forwards – provide the energy but also keep the two beams in strict synchrony, by kicking backwards when appropriate.

A problem arises because the separate rings for the two beams are contained within a single magnet – a system that ties the momentum of one beam to the momentum of the other, so a lead nucleus, containing 82 protons, is accelerated from 36.9 to 328 TeV, or from 0.18 to 1.58 TeV per proton or neutron.

To account for differences between protons and the heavy lead ions, the RF cavities need to be tuned to different frequencies for each beam. This keeps both particle types on stable central orbits inside their respective rings during injection and acceleration. Similar situations have caused instabilities in other colliders. Radiofrequency cavities in the LHC tunnel had be retuned to accelerate protons and lead ions (Image: CERN)

"The RF systems of the two rings can be locked together only at top energy before collisions, when the small speed difference that still remains can be absorbed by shifts of the orbits that are acceptably small," says Jowett. The beams then have to be further adjusted, again by the RF system, so that collisions take place inside detectors, where experiments take physics data. Much detailed work has gone on behind the scenes to prepare LHC systems for this new operational cycle.

This week’s short run will give the experiments a first taste of proton-nucleus collisions before the main run in January to February 2013, the last LHC physics before the accelerator is shut down for maintenance. This will give the experiments vital data to benchmark the lead-lead collision data taken in 2010 and 2011 and also open up exploration of new physics topics.