LHC Report: Collisions and spring cleaning at the LHC

On 28 April 2018, 13 days ahead of schedule, the operators of the LHC successfully injected 1200 bunches of protons into the machine and collided them 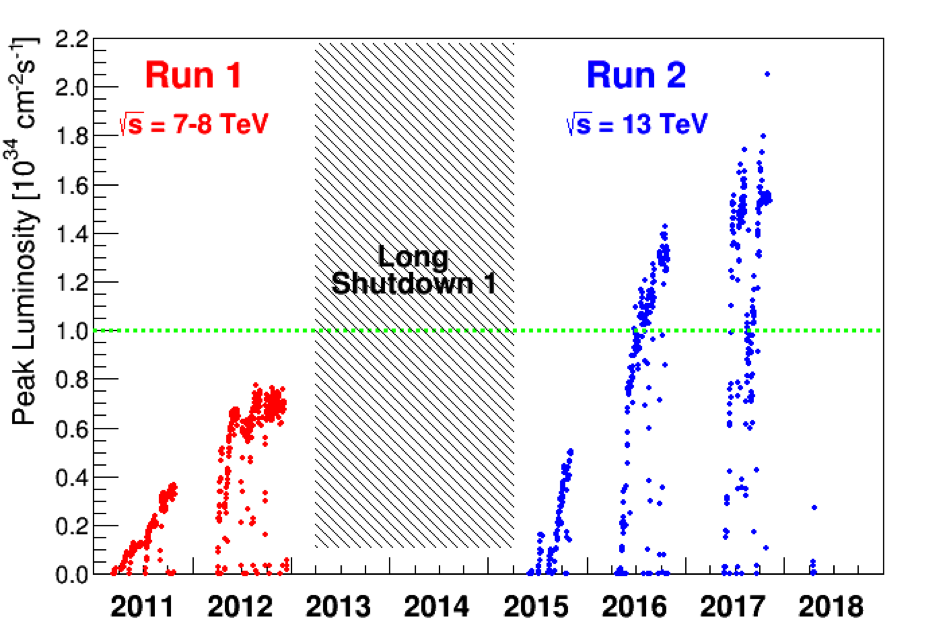 The peak luminosity of each fill as a function of the date. A few points have now been plotted for 2018, indicating the first steps of the intensity ramp-up phase. The green line indicates the LHC design luminosity.

On 28 April 2018, 13 days ahead of schedule, the operators of the LHC successfully injected 1200 bunches of protons into the machine and collided them. This formally marks the beginning of the LHC’s 2018 physics season.

An important milestone was achieved on Tuesday, 17 April, when, for the first time in 2018, stable beams were declared and the experiments started to take data, although only at very low luminosity levels, and with only three bunches per beam. The LHC has now entered the period during which the final beam commissioning steps will be interleaved with stable beams for the experiments, with a stepwise increase of the number of bunches in each beam until the maximum number of 2556 bunches per beam is reached.

The scrubbing run is another key step in the beam commissioning process, preparing the machine to perform well with a large number of bunches. The scrubbing process “cleans” the surface of the vacuum chamber of “loose” electrons. Loose electrons can detach and then build-up as a cloud in the vacuum chamber, affecting the beam’s stability and quality. The duration of the scrubbing run depends on the type of work that took place during the YETS. This time, the machine was neither extensively opened, nor warmed up to room temperature. The one new component that required extra attention was an injection kicker module that was exchanged during the YETS. Therefore, only one day of scrubbing – performed on Monday, 23 April – was required to establish the conditions necessary for running with 2556 bunches per beam and to condition the injection kicker module. The machine was successfully filled with 2820 bunches and the beam was maintained for several hours at a low (injection) energy (450 GeV).

A large number of measurements were made during the scrubbing run to monitor the effectiveness of the cleaning and to decide when to stop. Against expectations, some activity was observed in the interconnection of 16L2, where, in 2017, some gas condensate caused regular beam losses. This problem could be circumvented by filling the LHC with a different bunch pattern. It is still early days to be able to draw conclusions and so more measurements, with an increased number of bunches at higher energies and in stable beams, will be required to understand the extent and possible consequences of the observed activity.

The threshold of 1200 bunches, which is considered significant in terms of data taking, was expected to be reached around 11 May, but it was already reached on 28 April. A revised 2018 LHC schedule, which takes into account the faster than anticipated commissioning, has been approved and published, providing 131 days of physics with 25 ns proton beams, 17 days of special runs with protons, usually at a lower luminosity production rate, and 24 days of lead-lead collisions at the end of the year.

Also read the article about the start of the 2018 data-taking period here.