What’s YETS for the experiments? 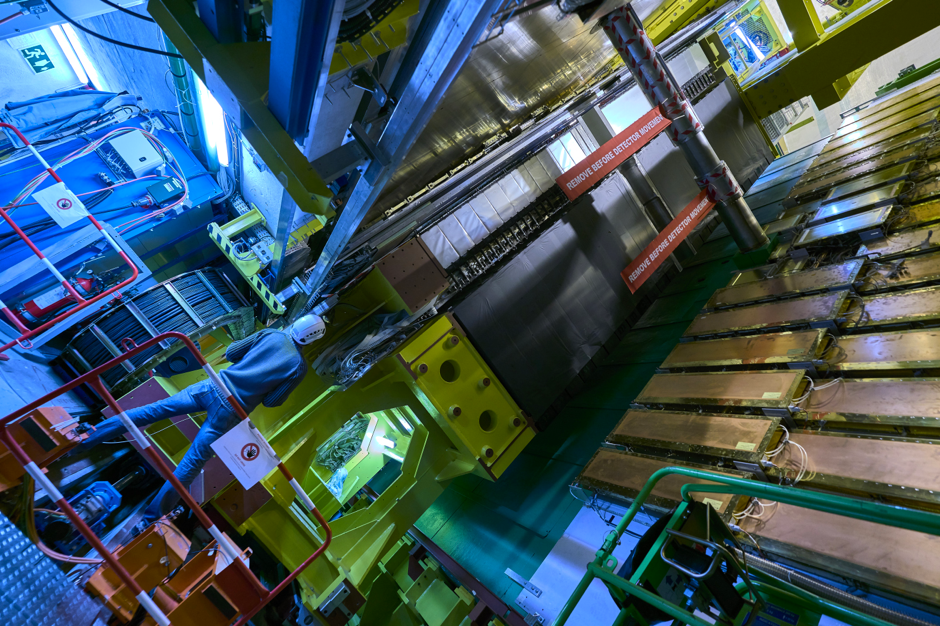 Work to maintain the LHCb detector has been carried out during the YETS. Here you see, from right to left, the muon chambers, the LHC beam pipe, the hadronic calorimeter and the electromagnetic calorimeter. (Image: Juliian Ordan/CERN)

The year-end technical stop (YETS) is now over halfway through and just as lots of repairs and upgrades are being done in the LHC and the injectors, each of the LHC experiments is also being refreshed.

LHCb is using this period to perform maintenance work on its many sub-detectors in order to ensure that the detector is ready to make the most of this final year of Run 2, once protons begin to circulate in the LHC again from April 2018. The two-year Long Shutdown 2 will start in December 2018 and, during this period, LHCb will face its first major upgrade, which will allow the experiment to take data at a much higher rate.

At ALICE, the time has been used to undertake a very delicate procedure: an endoscopic cleaning of the time projection chamber (TPC), which will make it more efficient and afford higher collision rates in preparation for Run 3, which will begin in 2021. Using endoscopic cameras, the insides of the TPC were explored and the presence of filaments of dust was detected. These were removed using small extractor tubes that acted like tiny vacuum cleaners.

During the long shutdown, an upgrade of the TPC is planned, which will see it equipped with new readout chambers and electronics designed to allow the experiment to cope with the expected higher event rate. Since the central barrel of the TPC will stay as it is, efforts to maintain it are key to guaranteeing the correct functioning and high efficiency of the detector.

For ATLAS, work during the YETS has meant routine repairs and maintenance of the sub-detector systems. Two of the experiment’s 32 cathode strip chambers (CSC) were brought to the surface for repairs and then reinstalled in the detector. These multiwire proportional chambers are based on Georges Charpak’s Nobel-Prize-winning invention, which celebrated its 50th anniversary last week.

The YETS has been especially busy for CMS. Before the Laboratory’s annual two-week closure over Christmas, part of the new pixel tracker installed in early 2017 was brought to a clean room on the surface at Point 5 to begin consolidation works in preparation for the 2018 data-collection run.

Members of CMS worked there every day of the closure, performing diagnostic tests to help develop maintenance and refit procedures for the pixel system, the rest of which was brought to the clean room early in the new year. All components have now been re-inserted inside CMS and cold-testing will begin in the first few days of March.

Another key ongoing task for the collaboration is the Phase-1 Upgrade of the hadron calorimeter (HCAL). The “forward” part of this calorimeter (around the beam pipe as it enters/leaves CMS) was upgraded a year ago, while the upgrade of the so-called “endcap” section is now almost complete. The central “barrel” components will be re-equipped during the long shutdown, ready for LHC Run 3 and, eventually, HL-LHC.

In preparation for the long shutdown, CERN’s Handling Engineering team and CMS have installed a second 20-tonne crane in the underground experimental cavern housing the detector. The installation was achieved in record time and will give CMS greater flexibility for moving sub-detector elements in the cavern during LS2 and beyond.

The last few weeks of the YETS continue to occupy the full attention of CMS Technical Coordination as the detector is readied for the next round of collisions.