How to produce the purest argon ever? 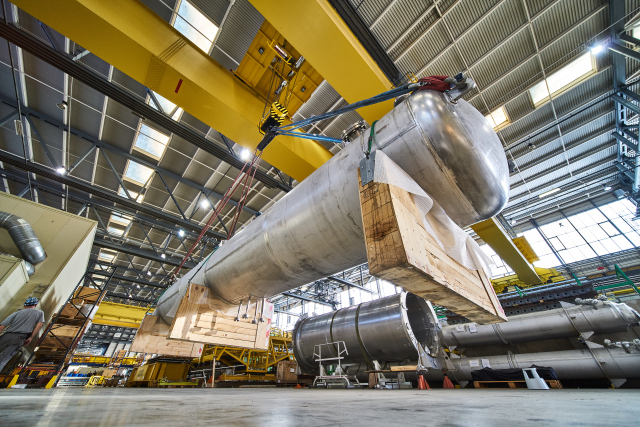 ARIA’s modules are being leak-tested at CERN before travelling to Sardinia, Italy. The top, bottom and one standard column module have now been lined up horizontally to test their alignment. (Image: J. Ordan/CERN)

Producing the purest argon ever made is no mean feat, in fact it needs a column 26 metres taller than the Eiffel Tower.

CERN is part of a project, called ARIA, to construct a 350-metre-tall distillation tower that will be used to purify liquid argon for scientific and, in a second phase, medical use.

The full tower, composed of 28 identical modules plus a top (condenser) and a bottom (re-boiler) special module, will be installed in a disused mine site in Sardinia, Italy.

The project is was initiated to supply the purest argon possible to the international dark matter experiment DarkSide at INFN’s Gran Sasso National Laboratories. DarkSide is a dual-phase liquid-argon time-projection chamber that aims to detect the possible passage of a dark matter particle in the form of a Weakly Interacting Massive Particle (WIMP) when it hits the argon nuclei contained in the detector. Since this WIMP-nuclei interaction is predicted to be extremely rare, the detector must contain only the purest argon possible, so as not to accidentally produce a spurious signal.

ARIA has been designed to produce this extra-pure argon. Atmospheric argon contains many “impurities” such as water, oxygen, krypton and argon-39, an isotope of argon, which are all sources of unwanted signals. Argon from underground sources is already depleted from the argon-39 isotope by a factor of 1400, but this is still not enough for dark-matter research. ARIA is designed to purify underground argon by a further factor of 100.

For more information, read this article.

A 350-metre-tall tower to purify argon