Superconductors are the primary focus of next week’s major EUCAS 2017 conference, which will also include events aimed at the general public 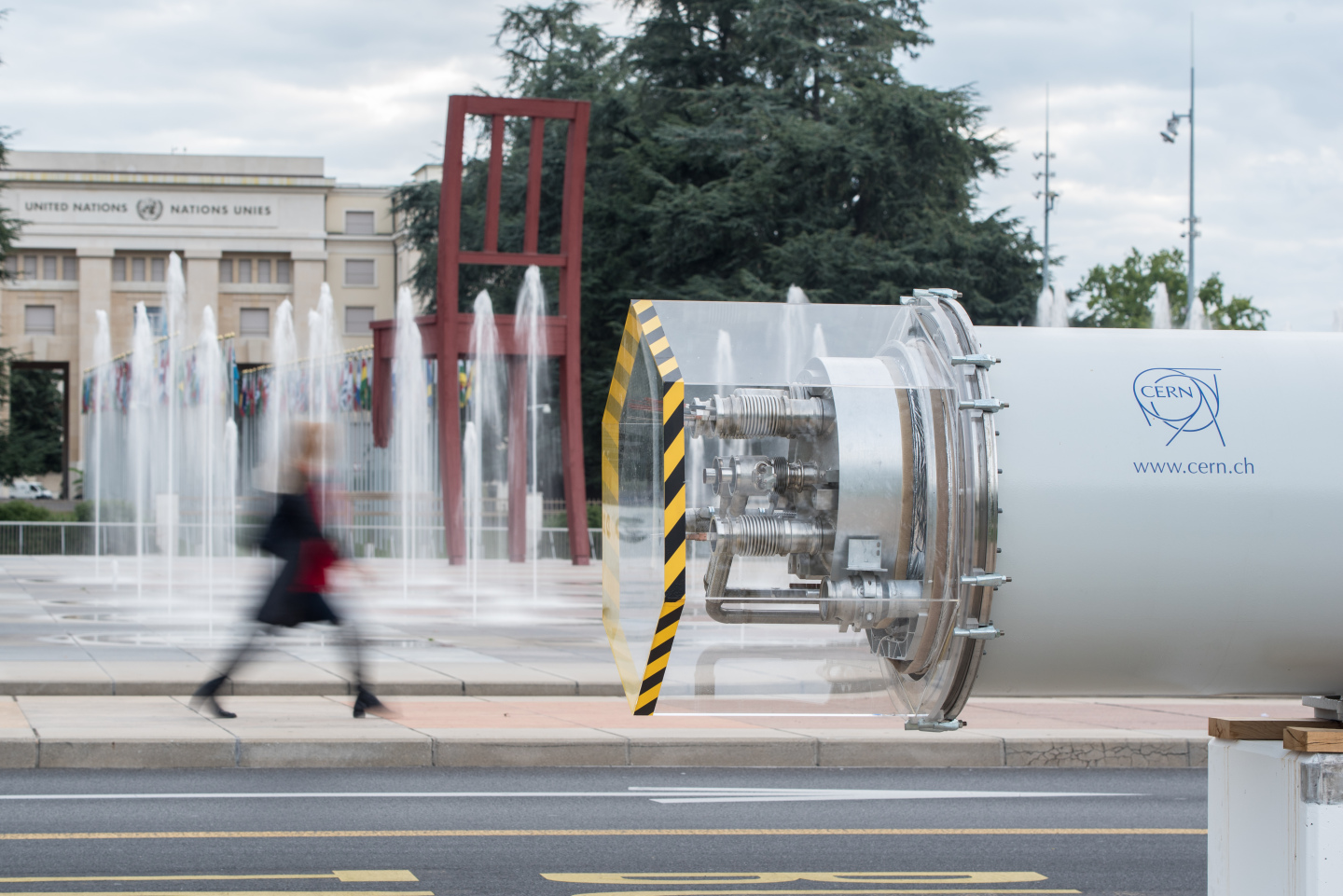 To celebrate the fact that EUCAS 2017 is being held in Geneva, one LHC superconducting magnet has been installed in the Place des Nations (photo) and another near the Vernets ice rink. (Image: Michael Struik/CERN)

Next week, the brightest and best in the field of superconductivity will flock to Geneva. More than 1000 experts will attend the 2017 edition of the biennial European Conference on Applied Superconductivity (EUCAS), which CERN is organising in collaboration with the University of Geneva and EPFL-SPC under the auspices of the European Society for Applied Superconductivity. EUCAS 2017 will bring together researchers and engineers from industry and public research to share the latest advances in superconducting technology: from materials and cables to applications on the gigantic scale of the LHC or the miniature scale of electronic devices.

Of course, it’s no coincidence that CERN is co-organising such a conference. The LHC is the biggest superconducting system in the world, and CERN’s experts are working on new superconductors for the accelerators of the future. Magnetic resonance imaging machines, a common sight in hospitals, might be the primary industrial use of superconductors, but high-energy physics, with its ever-increasing performance needs, is at the forefront of innovation.

In fact, particle physics has been using superconducting magnets since the late 1960s in order to explore higher energy ranges than previously possible. Such magnets are capable of generating stronger magnetic fields to curve particle trajectories, thereby allowing the energy to be increased. Physicists first fitted their detectors with superconducting magnets, and then, from the 1980s onwards, they started using them in accelerators. The world’s first superconducting collider, Fermilab’s Tevatron in the US, was equipped with magnets generating a field of 4.3 tesla. The LHC magnets can generate fields of 8 tesla, and those in the High-Luminosity LHC (HL-LHC), currently in development, will be able to reach almost 12 tesla.

Work on high-temperature superconducting magnets continues in parallel. Physicists have high hopes for these magnets, which were first devised 30 years ago, as they can function at higher temperatures than low-temperature superconductors (over 30 kelvin compared with just a few degrees kelvin). They can therefore be less complicated and less expensive to use, which opens up new horizons for superconductor applications. On the other hand, the materials needed to build them are very costly and highly complex to use, but research on the subject is advancing, stimulated by laboratories like CERN.

“The virtuous circle between high-energy physics and superconductivity goes on, in particular with the pioneering research on high-temperature superconductors being carried out at CERN,” explains Lucio Rossi, Project Leader for the High-Luminosity LHC and co-chair of the EUCAS 2017 conference along with Luca Bottura, leader of CERN’s Magnets, Superconductors and Cryostats group. “This work allows us to envisage dipole magnets generating fields of 20 to 25 tesla - a massive challenge that would not only enable us to explore new physics regions but would also open the door to new applications of superconductors in medicine, energy and other fields impacting our daily lives.”

The CERN Courier has devoted its September issue to superconductors, their history and their close links with fundamental physics (read it here).

EUCAS 2017 will feature a number of events and activities aimed at the general public alongside the conference:

- 6.30 p.m. on Tuesday, 19 September at Uni Dufour, U600 auditorium:
“The Higgs boson and our life” by Fabiola Gianotti. The Director-General of CERN will recount the discovery of the Higgs boson and its impact on science and society. Free entry. Lecture in English with simultaneous interpreting into French. More information on the website of the University of Geneva.

- From Friday, 22 to Sunday, 24 September: A “hackathon” focusing on future applications of superconductors will take place at CERN’s IdeaSquare as part of EUCAS 2017. This workshop will bring together experts in superconductivity and technology transfer with students of science and technology and management. Its goal is to identify new avenues for the application and commercialisation of superconductors.
Hosted by CERN and the EASITrain network, this event will be led by members of the FCC study and is supported by the HL-LHC project, the University of Vienna, the Knowledge Transfer group and IdeaSquare.
The final presentation, which is open to the public, will take place at 11.30 a.m. on Sunday, 24 September at IdeaSquare. See the website for more information.