Construction of the protoDUNE detectors begins

With the arrival of key detector components at CERN, the construction of protoDUNE’s single-phase module can now get started 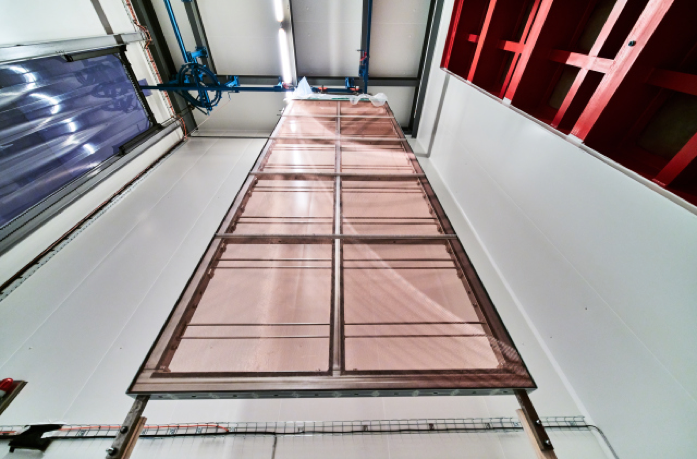 Two large neutrino detectors, the single- and dual-phase protoDUNE modules, are being built at CERN. They are prototypes of the future Deep Underground Neutrino Experiment (DUNE) detector, the construction of which has recently begun in the United States. Each of these detectors is a 10x10x10-metre Liquid Argon Time Projection Chamber, with a single- (SP) or dual-phase (DP) configuration, containing about 800 tonnes of liquid argon. While the two big cryostats housing the detectors are about to be completed, the construction of the protoDUNE-SP detector has just started, following the arrival of two key components.

The first Anode Plane Assembly module, which will collect signals from particles passing through the detector, has recently arrived at CERN. It will be tested, together with its electronics, before being installed in its final position inside the cryostat. The protoDUNE-SP detector will have six of these modules, which are 6 metres high and 2.5 metres wide. They are currently being built in the UK and US and will be shipped to CERN within the next few months.

In parallel, other parts of the protoDUNE-SP detector are being assembled at CERN, including the field cage, which keeps the electrical field uniform inside the volume of the detector, where particles are revealed. This is important because the electrical signal released by ionising particles crossing the detector is extremely small, so a perfectly uniform electrical field is needed to avoid introducing spurious signals. Four of the 28 field-cage modules have already been assembled and are stored in the EHN1 hall, ready to be installed.

The assembly and installation of the detector parts is expected to be completed by spring next year, in order to have protoDUNE-SP ready to take data in autumn 2018, before the two-year scheduled shutdown of the LHC.