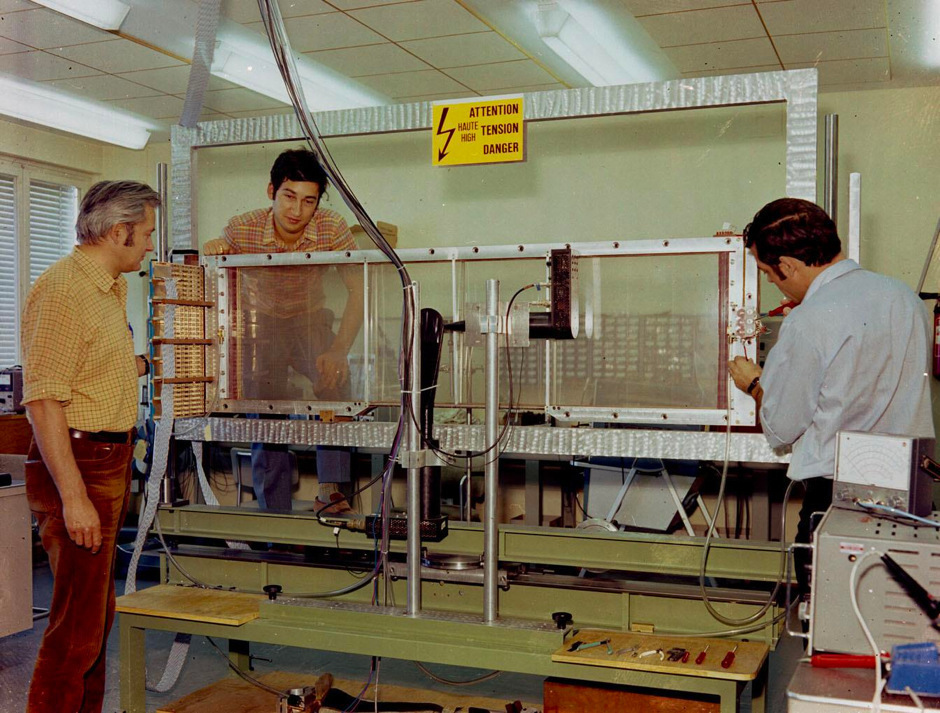 Georges Charpak’s 'multiwire proportional chamber' particle detector consisted of many parallel wires, each connected to individual amplifiers. Linked to a computer, it could achieve a counting rate a thousand times better than before (Image: CERN)

Fifty years ago today, Georges Charpak revolutionised particle detection while working at CERN when his paper detailing the invention of a new particle detection system, was published. The new detector technique could record millions of particle tracks each second, instead of the one or two tracks captured by earlier methods. The first multiwire proportional chamber was born.

Until 1968, most detection in particle physics meant examining thousands of photographs from bubble or spark chambers, flash tubes or scintillation counters, to look for interesting tracks left behind from the debris of particle collisions. Discovering new particles or phenomenon often meant searching for rare one-in-a-billion interactions.  These early photographic methods were not able to quickly choose that one, making the discovery of new particles and new phenomenon time-consuming, painstaking work.

Then came a revolution in transistor amplifiers. While a camera can detect a spark, a detector wire connected to an amplifier can detect a much smaller effect. Georges Charpak realised that with modern electronics, and by connecting the detector directly to a computer, you could dramatically increase data collection. On 23 February 1968, he and colleagues published a paper entitled “the use of multiwire proportional counters to select and localize charged particles”.

In a proportional counter, an electrical voltage is applied to a gas-filled tube with a wire running through its centre. The voltage ionises the gas, as negatively-charged electrons are liberated from the gas atoms and move towards the wire in the centre. Here the high electrical field means these negative ions move faster, ionising more of the gas, freeing more electrons to be accelerated, and so on. This avalanche of ions creates an electrical signal on the wire, which shows the position of the first ionisation.

Charpak proposed, instead of a tube and a single wire, to use a gas-filled box with a large number of parallel detector wires running through it. Each wire was connected to individual amplifiers, so acted as an independent proportional counter. When linked to a computer, this could achieve a counting rate a thousand times better than any existing detectors.

The invention revolutionised particle detection, pushing it into the electronic era.

In 1992 Charpak won the Physics Nobel Prize for his “breakthrough in the technique for exploring the innermost parts of matter”, and today many experiments in particle physics routinely use some type of track detector based on the principle of Charpak’s multiwire proportional chamber. It has contributed to important discoveries in particle physics including the charm quark, the W and Z bosons, and the gluon, and it has had several other applications in medicine and biology.

Find out more in the CERN Courier:

An interview with George Charpak on the occasion of his 85th birthday.

A tribute to George Charpak by his friend and colleague, Ioannis Giomataris.