When you've got a discrepancy in the data, it might be time for theory and experiment to collaborate 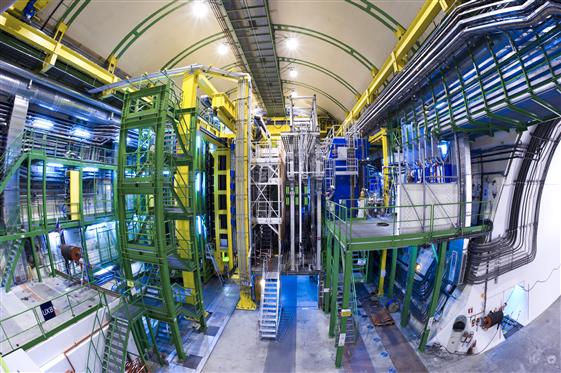 A view of the LHCb detector. (Image: Maximilien Brice/CERN)

If you hear hoof beats, common sense says the cause is more than likely a horse. Yet, the possibility still exists that you’re actually hearing a zebra. Physicists at LHCb are applying that same logic to an unusual finding in a recent analysis of the B meson.

Around one in every million B mesons decays into an excited kaon and two muons. The decay can occur in several different ways, so physicists classify them in what they call bins. The Standard Model predicts precisely the probability of the angles of these particle decays in each bin. The experiment can measure this probability, so it is an observable. Any difference between the measured observable and prediction could indicate new physics.

Nicola Serra of LHCb, one of the analysts of the B meson decay data from 2011, and his colleagues found such a difference.

“Most of the observables we measured in this analysis were close to Standard Model expectations, but a particular observable showed a sizable discrepancy,” he says.

On the 'sigma' scale that physicists use to describe the certainty of a result, Serra's discrepancy between the expected and the measured result scored 3.7 sigma - there could be evidence for new physics but they need more data to confirm it. When they considered the probability of seeing that particular deviation with all of the data from the entire analysis, the sigma level dropped to 2.8 sigma, translating to a half a percent chance that the discrepancy is caused by statistical fluctuation. (The gold standard for a discovery is 5 sigma.)

A team of theorists then looked at the same decay and included more observables than the LHCb group did. They found, with this aggregation of many measurements, a consistent pattern of deviations that boosted the sigma to 4.5. That’s almost to the level of discovery, but within parameters that measure the presence of possible new physics. These parameters are more inclusive than those the LHCb team used.

“The theoretical interpretation is very interesting; that can’t be denied,” says Serra. “As an experimentalist, I have to focus on the data itself instead of the interpretation. If we see something that differs from the prediction, it’s crucial to understand if the pattern is real or not.”

If there's a deviation from the prediction, experimentalists try to understand if something is wrong with the data. Only once all of the machine systematics and statistics are checked and double-checked can they say, with certainty, that there is a true discrepancy.

“The experimental paper only shows the data. The theory paper is the one that gives the interpretation. Both are pieces of a puzzle and they fit together nicely,” says Joaquim Matias, a theorist from Autonomous University of Barcelona and one of the paper’s authors. “The experimentalists found deviations and the theorists showed that they can be explained within a consistent picture for the first time.”

The data from this particular LHCb analysis show promise, encouraged by the theoretical possibilities, purported in the paper, of aggregated old and new LHCb data. But only once the full dataset undergoes the same treatment of crosschecks will the physicists determine if this decay is a horse or a zebra.

The LHCb team has started analysis of their total dataset, which is three times larger than the data presented in their paper. They expect to publish an update in the coming year. Both the experimentalists and theorists say that only a joint effort between their teams will allow them to establish whether this new physics anomaly is real.