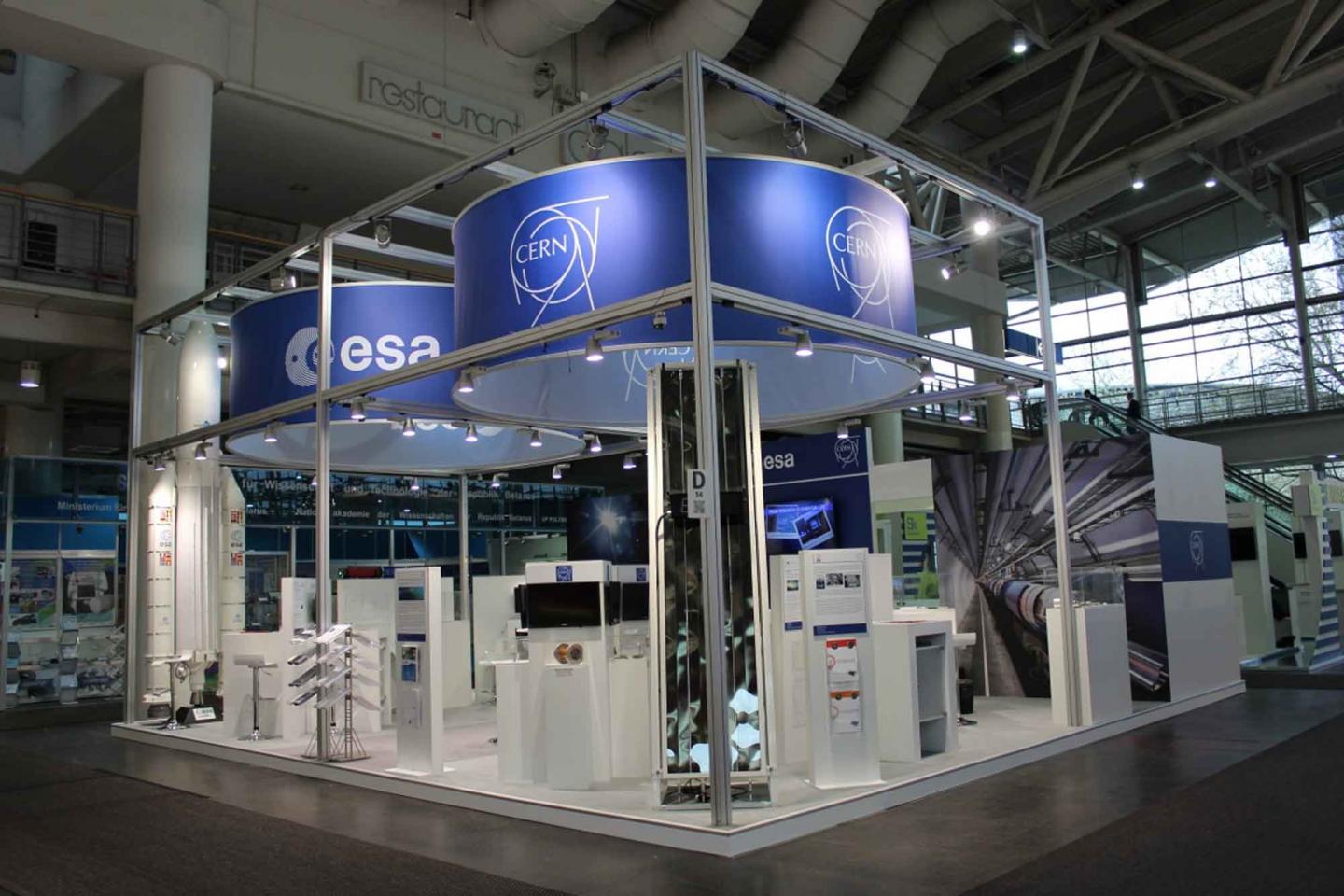 CERN will share a stand with the European Space Agency at the Hannover Messe Industrial Fair (Image: rheinland relations)

CERN will showcase some of its most promising technologies and spin-off companies to some 250,000 expected visitors at the world’s biggest industrial fair, the Hannover Messe in Germany. On a stand shared with the European Space Agency, CERN’s Knowledge Transfer group will display a variety of potentially high-impact technologies and introduce some of its spin-off companies as co-exhibitors. The shared stand is a first tangible implementation of the bilateral agreement on cooperation signed by CERN and ESA on 28 March. Hannover Messe starts today and ends on 11 April.

"There is a long history of scientific exchange and cooperation between CERN and ESA," says Enrico Chesta, head of Technology Transfer in CERN’s Knowledge Transfer group. "They are operating in very different fields, but their goals are similar: both conduct fundamental research, and both drive innovation for research-specific technologies that can in turn be useful for society. Our joint stand in the central R&D hall at Hannover Messe is a visible demonstration of our commitment and effort to sustain the competitiveness of industry and promote high-tech ventures in our member states."

Visitors will be able to test the outstanding thermal properties of new materials developed at CERN, observe the performance of the world’s highest-efficiency solar collector, witness precision tracking based on technology that could revolutionise areas as diverse as transport logistics or football training, or examine a Kinder Surprise – a chocolate egg containing a plastic toy – under a mobile CT scanner to reveal its contents without breaking the egg. CERN and ESA have invited several companies that have developed out of ideas born in particle physics or space research to present their products and will also showcase some promising technologies available for licensing.

"Promoting CERN’s technologies on a pavilion shared with ESA is also a way to highlight the important synergies between particle physics and space in many technical areas such as advanced materials, surface treatments and rad-hard electronics," says Chesta. Hannover Messe, whose partner country this year is Holland, is renowned as a platform for the latest technological and industrial trends.

The last time CERN took an invention to Hannover was in 1977. It presented an accelerator-control system converted into drink dispenser – "apparently the first application of the capacitive touch screen in the world," according to the CERN Courier.

Visit the CERN-ESA stand at Hannover Messe Hall 2 stand D54 and stay tuned for more details on their high-impact technologies.

Taking CERN and ESA technology to the world’s...