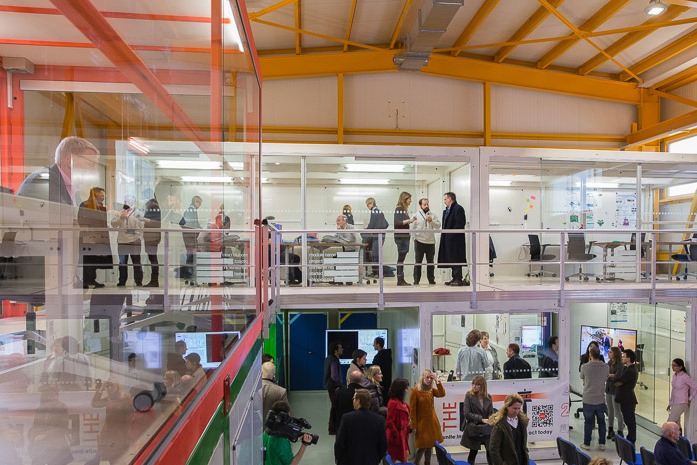 Today, the IdeaSquare building is being officially inaugurated allowing CERN council to visit for the first time. IdeaSquare is the name of a project designed to nurture innovation at CERN. “The scope of the project is to bring together researchers, engineers, people from industry and young students and encourage them to come up with new ideas that are useful for society, inspired by CERN’s ongoing detector R&D and upgrade projects,” says Markus Nordberg who, together with Marzio Nessi, set up IdeaSquare within CERN’s Development and Innovation Unit.

In addition to pursuing its core mission, IdeaSquare has already attracted two EU-funded projects – EDUSAFE and TALENT – and has hosted two Challenge Based Innovation (CBI) courses and one hackathon, among other events. “Projects can find office space and a ready-to-use technical infrastructure here. They can also take advantage of the great networking and idea-sharing opportunities,” says Nordberg. The building, once an old storage space, has been completely refurbished and creatively uses repurposed shipping containers and a bus for office space and a meeting room.

The only requirement needed to take part in the IdeaSquare programme is to have an idea worth nurturing – that is, an idea that combines innovation with usefulness in particle physics and for society. “At IdeaSquare, we agree to support projects only after consulting with all the parties involved, including, of course, the CERN Management and experiments,” says Nordberg.

Today’s event includes an announcement about the release of a unique piece of software. The underlying code is from augmented reality software, which is based on technology used in detectors at CERN. The project is a collaboration between CERN and the Italian university UNIMORE and will be used by the researchers to help with autism studies.

A version of this article first appeared in the CERN Bulletin

Call for crowdsourcing projects pursuing the ...

ATTRACT unveils the projects that will benefi...