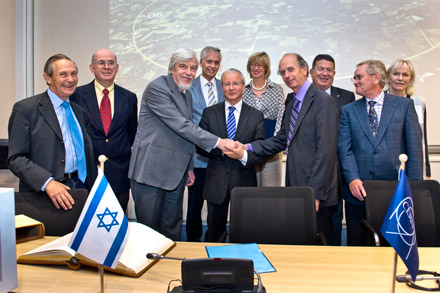 Geneva 16 September 2011. CERN1 Director General Rolf Heuer and Israeli Ambassador and Permanent Representative of Israel to the United Nations Office and other International Organizations in Geneva, H.E. Mr. Aharon Leshno-Yaar today signed a document admitting Israel to CERN Associate Membership, subject to ratification by the Knesset. Following ratification, Israel will become an Associate Member of CERN for a minimum period of 24 months. Following this period, CERN Council will decide on the admission of Israel to full Membership, taking into account the recommendations of a task force to be appointed for this purpose. Israel has a long-standing relationship with CERN, and has been an Observer at the CERN Council since 1991.

“It is a vital part of our mission to build bridges between nations. This agreement enriches us scientifically, and is an important step in that direction,” said CERN Director General Rolf Heuer. “I am very pleased that CERN’s relationship with Israel is moving to a higher level.”

“I am very happy with this decision,” said Eliezer Rabinovici, Professor and Director of the Institute for Advanced Study at the Hebrew University in Jerusalem and Israel’s scientific observer to Council. “I view it as recognition of the Israeli contributions, both scientific and technological to CERN over the years. The Israeli scientific community is looking forward to the continuation of this joint adventure.”

Israel has a strong tradition in both experimental and theoretical particle physics, with a major involvement in the OPAL experiment at CERN’s flagship accelerator through the 1990s, the Large Electron Positron collider. Israel’s accession to Observer status in 1991 followed an agreement to contribute funds to the CERN budget to support Israeli scientists, as well as providing equipment to CERN. The Israeli fund also contributed to LEP running, supported LHC construction and R&D for future accelerators. During its association with CERN, Israel has also supported Palestinian students at CERN, notably sending mixed Israeli-Palestinian contingents to CERN’s summer student programme.

In 2009, Israel was accepted as a special Observer State, with the right to attend restricted Council sessions for discussions of LHC matters. Israel currently has a strong involvement in the ATLAS experiment, and participates in a number of other experiments at CERN.

CERN, the European Organization for Nuclear Research, is the world's leading laboratory for particle physics. It has its headquarters in Geneva. At present, its Member States are Austria, Belgium, Bulgaria, the Czech Republic, Denmark, Finland, France, Germany, Greece, Hungary, Italy, the Netherlands, Norway, Poland, Portugal, Slovakia, Spain, Sweden, Switzerland and the United Kingdom. Romania is a candidate for accession. Israel is an Associate Member in the pre-stage to Membership. India, Japan, the Russian Federation, the United States of America, Turkey, the European Commission and UNESCO have Observer status.