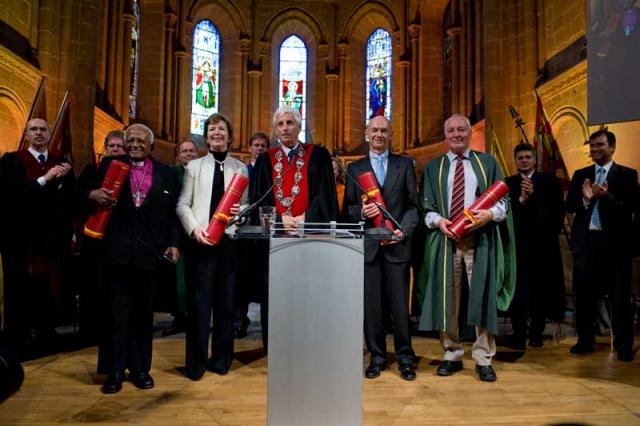 Lyn Evans was among those honoured at the University of Geneva's 450th anniversary celebrations (Image: CERN)

Geneva, 5 June 2009. The University of Geneva is today holding a ceremony at which honorary degrees will be bestowed on four figures renowned for their activities in bringing nations together, including international collaboration in scientific research at CERN1.

Geneva, 5 June 2009. The University of Geneva is today holding a ceremony at which honorary degrees will be bestowed on four figures renowned for their activities in bringing nations together, including international collaboration in scientific research at CERN1.

The ceremony is to celebrate the university’s 450th anniversary2. The honorary degrees, which recognize endeavours in human rights and in fostering dialogue between nations, are being awarded to Mary Robinson3, Desmond Tutu4, Pascal Lamy5 and Lyn Evans.

Lyn Evans led the project to build CERN’s Large Hadron Collider (LHC) from its inception in 1994 until start-up on 10 September 2008. The LHC, which is the world’s highest energy particle accelerator, is the Organization’s latest flagship research facility. It is poised to provide new insights into the mysteries of our universe. Nations from around the globe have contributed to the construction of the accelerator and its experiments.

"I am very honoured to receive this degree on such an historic occasion and in such esteemed company", said Evans. "The honour extends to the whole team in all corners of the world, who have brought this amazing project to fruition."

The ceremony, which is being held in St Peter’s Cathedral in Geneva, begins at 10 am. It will be preceded by a procession in full academic regalia that will include the representatives from Europe’s oldest universities.

Following the welcome from the rector of the University of Geneva, Jean-Dominique Vassalli, there will be a speech from Geneva State Councillor, Charles Beer, a message from Swiss Federal Councillor, Micheline Calmy-Rey, and a talk on the history of the university by honorary professor, Olivier Fatio. After the degree presentations, Pascal Lamy and Desmond Tutu will talk on "Two contrasting visions of human rights and globalization in the 21st century".

1. CERN, the European Organization for Nuclear Research, is the world's leading laboratory for particle physics. It has its headquarters in Geneva. At present, its Member States are Austria, Belgium, Bulgaria, the Czech Republic, Denmark, Finland, France, Germany, Greece, Hungary, Italy, Netherlands, Norway, Poland, Portugal, Slovakia, Spain, Sweden, Switzerland and the United Kingdom. India, Israel, Japan, the Russian Federation, the United States of America, Turkey, the European Commission and UNESCO have Observer status.
2. The University of Geneva is celebrating its 450th anniversary from February to December 2009. The programme of events to mark the occasion includes exhibitions, workshops, open days, festivities, conferences and debates for the general public.
3. Mary Robinson, Chancellor of the University of Dublin, is a well-known teacher and champion of international human rights. She was UN Commissioner on Human Rights from 1997-2002.
4. Desmond Tutu, archbishop-emeritus of Cape Town, is a renowned church leader and opponent of apartheid. He received the Nobel Peace Prize in 1984.
5. Pascal Lamy is Director-General of the World Trade Organization and a leading expert on globalization.

A very exciting year ahead

Michel Spiro promoted to officer of the Legio...

The 2021 five-yearly review completes its cou...

Register now for Beamline for Schools 2022