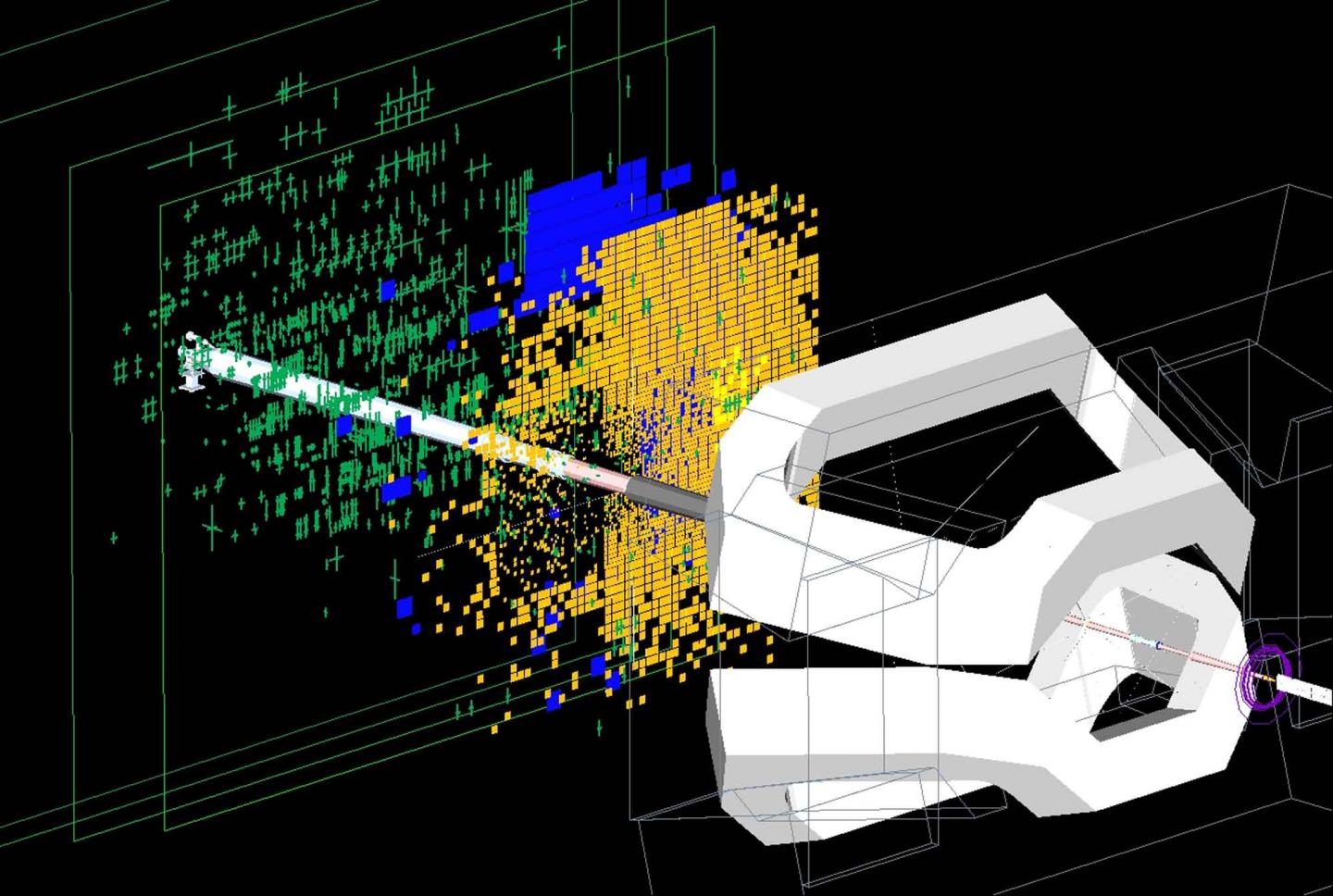 A "splash event" in the LHCb detector, recorded during an injection test in 2009 (Image: LHCb)

With the Large Hadron Collider (LHC) due to start up again at the end of this month, the team in the LHC Control Centre are busy testing the systems that deliver the beams.

At CERN, a series of accelerators boosts protons or ions to successively higher energies until they are injected into the LHC. The LHC then further accelerates the particles before delivering collisions to the four detectors ALICE, ATLAS, CMS and LHCb. The penultimate accelerator in the chain is the Super Proton Synchrotron (SPS), a machine nearly 7 kilometres in circumference, which receives particles from the Proton Synchrotron at 26 GeV, and boosts them to the 450 GeV needed for injection to the LHC.

Now, the LHC control team is testing the injection systems to ensure that the upcoming startup of the accelerator runs as smoothly as possible. Though particles will be injected into parts of the LHC this weekend, there will be no fully circulating beams until the planned startup at the end of this month.

"We will do two tests," says Ronaldus Suykerbuyk of the LHC operation team. "Beam 1 will pass through the ALICE detector up to point 3, where we will dump the beam on a collimator, and for Beam 2 we will go through the LHCb detector up to the beam dump at point 6." A screen placed in the beam pipe will register a successful pass as a bright dot. The team will also record other parameters, including the timings of the injection kickers – fast pulsing dipole magnets that "kick" the beam into the accelerator – and the beam trajectory in the injection lines and LHC beam pipe.

"This test really is a massive debugging exercise," says Mike Lamont, head of the operations team. "We've already pre-tested all the control systems without beam. If the beam goes around we’ll be happy!"

The ALICE and LHCb experiments are preparing their detectors to receive the pulses of particles. "ALICE will receive muons originating from the SPS beam dump," says ALICE physicist Despina Hatzifotiadou, "They will be used for trigger timing studies and to align the muon spectrometer".

LHCb will also be taking data. "These tests create an excellent opportunity for us to commission the LHCb detector and data-acquisition system. The collected data are also invaluable for detector studies and alignment purposes, that is, determining the relative geometrical locations of the different sub-detectors with respect to each other," says Patrick Robbe of LHCb. "It's exciting because the tests show that we are getting closer and closer to the restart!"

But there is still much work to do before first circulating beams, says Suykerbuyk. "We have to finish all the powering tests and magnet training as well as test all the other hardware and beam-diagnostic systems." It's going to be a busy few weeks for all concerned.