LHC Report: The LHC is full!

On 5 May, the last step in the intensity ramp-up process was completed, ten days ahead of schedule. The LHC is now filled with 2556 bunches per beam 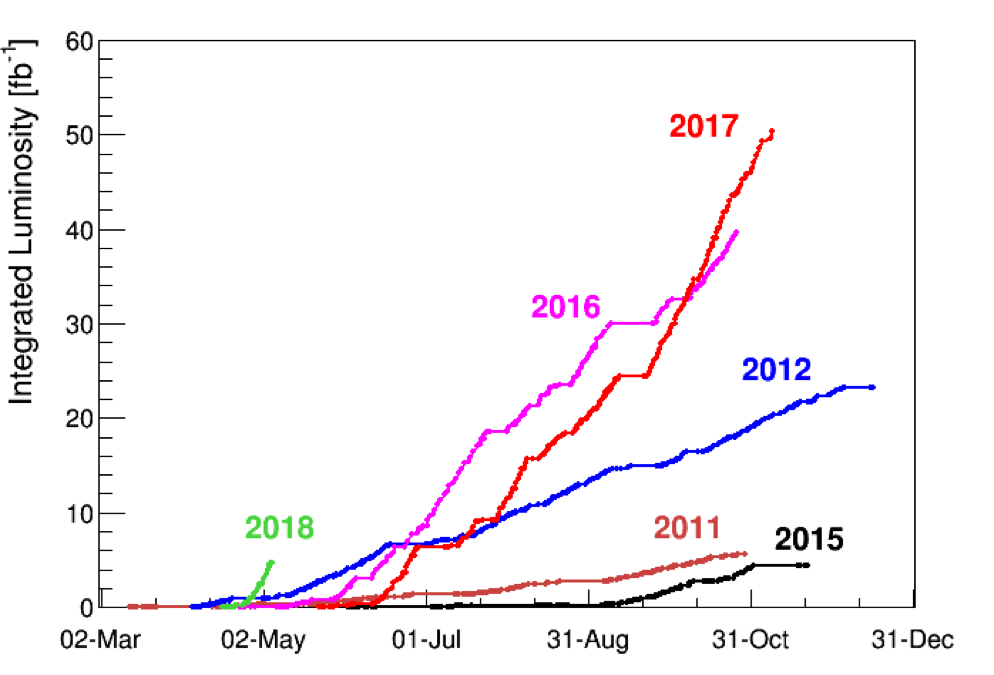 An early and steep increase in the 2018 integrated luminosity curve. For those tempted to extrapolate, there are technical stops, machine development sessions and special physics runs coming up that will form plateaus.

As mentioned in the last LHC Report, the LHC reached 1200 bunches per beam on 28 April and, during the scrubbing run, some activity was observed in the interconnection of 16L2 where, in 2017, the presence of gas condensate resulted in regular beam losses. At that time, it was not known if this activity would be serious enough to limit this year’s performance, which would involve a larger number of bunches. During the subsequent steps in the intensity ramp-up (i.e. 1551, 1887, 2175, 2319, 2460 and finally 2556 bunches per beam), the beam losses induced by 16L2 were closely monitored. These beam losses are of two types: firstly, a steady, constant beam loss that depends on the total number of particles per beam. This beam loss is substantially lower than the threshold that could provoke a beam dump, thanks in particular to a special solenoid that was installed during the second half of 2017. Secondly, erratic beam loss spikes that add to the steady losses, potentially surpassing the dump threshold. The steady beam losses increase when the number of bunches increases but, fortunately, the frequency of the beam loss spikes decreased the longer the beam circulated in the machine. These spikes were “conditioned away”, in the parlance used at the CCC for this effect, allowing running with a full machine.

Another very encouraging event took place on Saturday, 5 May, during the last steps of the intensity ramp-up, when the average peak luminosity for ATLAS and CMS was close to 2.1 x 1034 cm-2s-1, equalling or even surpassing the record peak luminosity of 2017. The only caveat here is that the final calibration of the luminosity measurements, provided by the experiments, still needs to be done, using the so-called van der Meer scans that are scheduled to take place during the weekend of 23 to 24 June, which might slightly change the peak luminosity value.

Since the start of the intensity ramp-up, luminosity optimisation by anti-levelling has been tested and used. To refresh your memory of this technique: during the fills, the instantaneous luminosity and the beam intensity decrease (i.e. luminosity burn-off). This allows, after some time, the crossing angle for the collisions to be reduced, which actually slightly increases the instantaneous luminosity, resulting in a greater accumulation of luminosity in the same amount of time. This was successfully used operationally in 2017. For the 2018 run, an extra step has been added at the end of the fill and after the initial reductions of the crossing angle. This extra step consists of squeezing the beams further down to even smaller sizes. Each fill starts with a beam squeezed down to a beta star (b*) of 30 cm, as used in 2017. Two steps have been added in the optimisation process, consisting of a further reduction, first to 27 cm and finally to 25 cm. Besides optimising luminosity production, this also allows testing of the various types of levelling (crossing angle and b* levelling) that are expected to be used routinely during the HL-LHC era.

From now on, the LHC is in production mode for physics. The operation of the machine will be consolidated in parallel, meaning that the machine settings will be further tweaked, beam life times optimised, performance stabilised and, if possible, increased. On Friday, 11 May, the integrated luminosity for ATLAS and CMS was already at 6.91 fb-1 (of the 60 fb-1 planned for 2018).