CERN and the HUG – a life-saving partnership

Since 2015, the Geneva University Hospitals (HUG) have had a permanent presence at CERN, improving emergency response in and around the laboratory 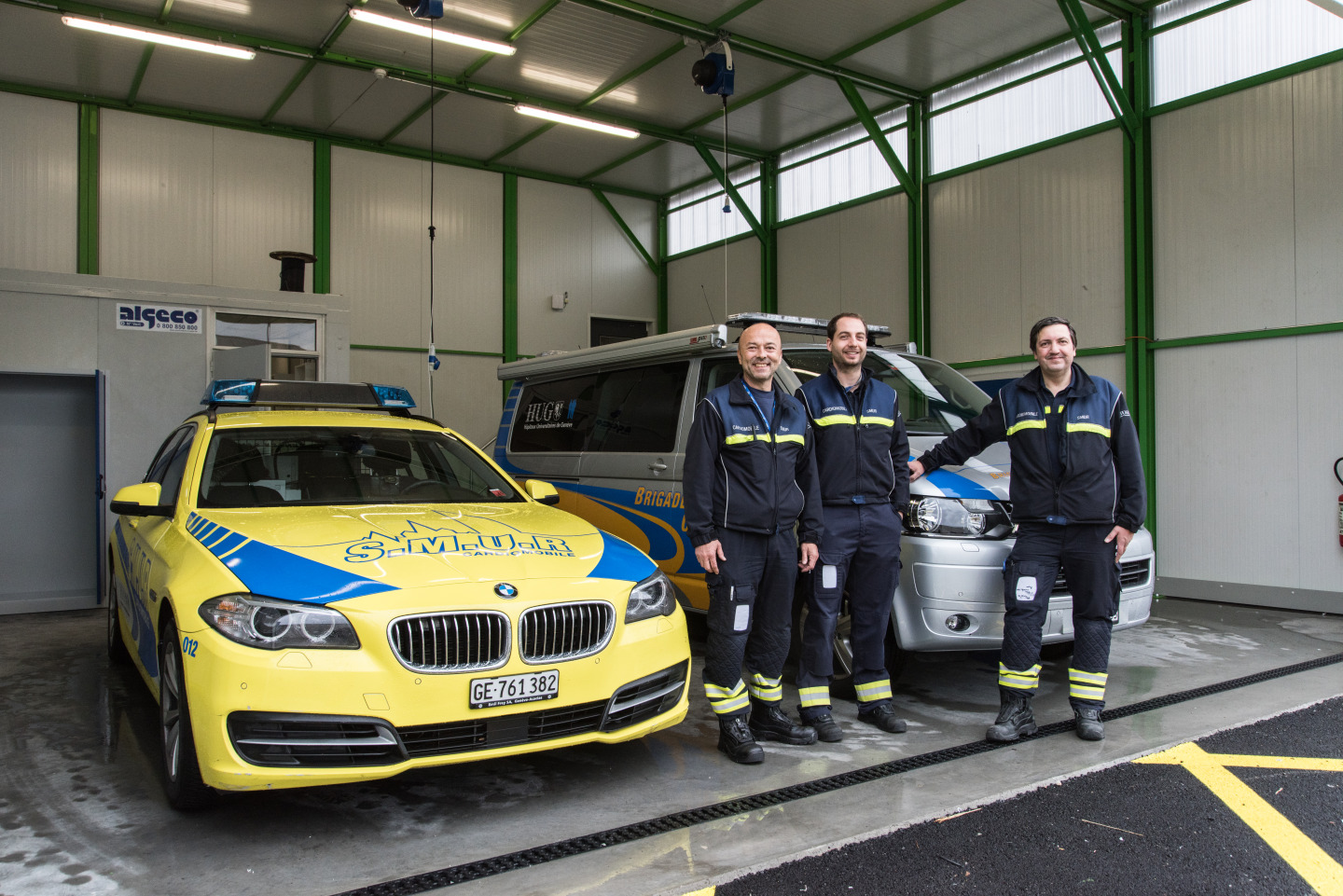 The Emergency operations centre on the CERN site, when it was inaugurated in 2015. (Image: Maximilien Brice)

The partnership established between CERN and the HUG in 2015 for an initial period of five years was designed to make the most of the synergy between CERN’s emergency response teams and the largest hospital in the region. Resulting from an initiative of Véronique Fassnacht, Head of the CERN Medical Service, supported by Eric Herbé, Head of Advanced Life Support in the CERN Fire and Rescue Service, the agreement is built around the stationing of a cardiomobile and paramedical team at CERN. This provides coverage not only for CERN, but also for the western side of the canton and the surrounding area: as far as first response is concerned, the border is invisible.

The partnership goes beyond the two signatories by effectively integrating CERN into Geneva’s emergency response systems. As a result of having a HUG cardiomobile on site, CERN’s emergency control room now has a permanent link and a single point of contact with the ambulance and emergency services control centre in Geneva, which responds to the general Swiss emergency number 144. As a result, CERN’s ambulance assists the Geneva fleet on request, improving service both for CERN and for the canton, and making survival much more likely in case of emergency.

Whenever you call the CERN emergency number, +41 22 767 4444, or just 74444 from a CERN phone, you are put in touch with an operator trained to rapidly assess the situation and respond accordingly. If the operator deems that the despatch of an ambulance is necessary, the Swiss control centre takes responsibility for providing the appropriate emergency response. This can lead to the additional despatch of the cardiomobile, or even an air ambulance, as has happened on more than one occasion since the partnership was established, undoubtedly saving the life of the victim on each occasion.

Emergency response relies on more than an effective ambulance service. It also depends critically on every link of the chain. In the case of cardiac arrest, for example, speed is of the utmost essence. It relies on those raising the alarm doing so without delay, on first aiders responding accordingly, and the organization and professionalism of the first response teams. CERN’s Fire and Rescue Service is structured around areas of expertise, from fire protection to advanced life support. There’s also a member of the team stationed at point 5, the furthest site from the main CERN campus, during working hours. This ensures that when an emergency happens, every member of the team is in the right place to act according to their area of expertise.

As well as an immediate improvement in emergency response, the partnership with the HUG brings long-term benefits to CERN. For example, the HUG now provides training in emergency response to CERN personnel in the Medical and Fire and Rescue Services, and the laboratory’s ambulance personnel are now able to take a course leading to the award of a diploma recognised nationally in Switzerland (the Brevet Fédéral de Technicien Ambulancier). The partnership also allows on the job training for safety control room personnel.

The CERN-HUG partnership is a life-saver. According to Yann Léchevin, Head of Operations at the CERN Fire and Rescue Service, there are already some six people alive and well today who would not have survived without it. “In some of the cases I’ve witnessed, the victim’s survival has seemed nothing short of miraculous,” said Léchevin, “but it’s not: it’s the result of a well prepared safety intervention system, good reactions throughout the chain and a well-working partnership between the three principal actors, CERN, the HUG and the Swiss emergency response system.”

* The short form number 74444 works from any CERN landline, but it is strongly recommended to programme the full number into your mobiles since depending on what network you are on, the short form may not work from mobiles.