Researchers' Night: Science at the shops 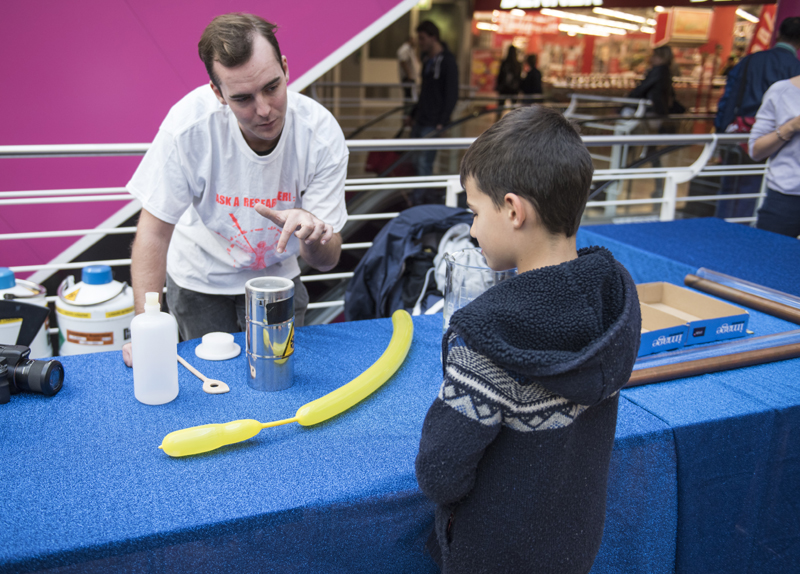 How do you explain science to the largest possible audience, and not just to science-lovers? One solution is to go where everyone ends up, at the shops. On 25 September, as part of European Researchers' Night, CERN organized the event POPscience at Balexert, a large shopping centre in Geneva. POPscience approaches scientific questions through popular culture. Comic strips, games, cinema and television… science is everywhere, and CERN scientists were there to explain it. Take a look at the photos below of the numerous activities organized.

Around 500 children attended the sessions for schools, and 600 spectators flocked to the public screenings at the centre’s multiplex cinema. Scientists, directors and authors were on hand to disentangle truth from fiction and science from science fiction in famous movies and TV series. The guests, some of whom appeared in person and others via video link, included Jorge Cham, author of PhD Comics and the spin-off film; David Saltzberg, physicist at the CMS experiment and scientific consultant for the television series The Big Bang Theory; Kip Thorne, scientific consultant for the film Interstellar; Lawrence Krauss, author of The Physics of Star Trek; and Italian astronaut Roberto Vittori, who gave a commentary on the film Gravity.

In the main area of the shopping centre, CERN scientists performed experiments and let the public try out augmented reality equipment.

In the multimedia shop FNAC, authors were on hand to sign books.

Among the shelves of youth literature, children were busy building Lego detectors.

Help bridge the gap between science and socie...

Environmental awareness: how CERN supports an...