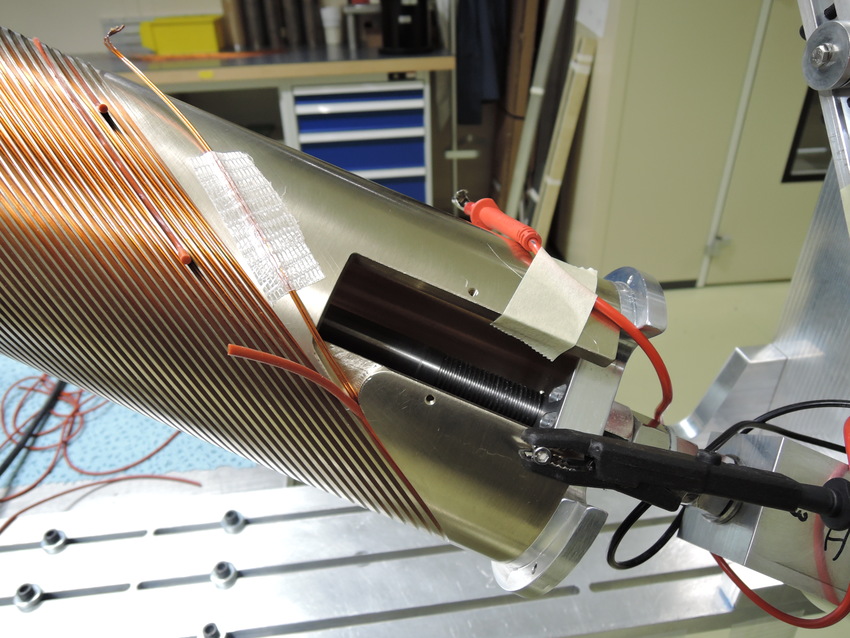 A 0.5-m-long short model was tested in August at CERN. It was an essential step to demonstrate the validity of the design and of the technological solutions. (Image: Glyn Kirby/CERN)

Among the 11 new types of magnet that are currently under development for the High-Luminosity upgrade of the LHC (HL-LHC), one has several bizarre names and a particular story behind it. These types of magnets are called, interchangeably, “canted cosine theta”, “double helix” or “tilted solenoid” magnets. They are based on a simple configuration where the conductor cable is wound around the beam tube as two oppositely tilted solenoids (see picture) – yes, solenoids just like those today installed in CMS, but approximately seventy times smaller and with much more compact winding. Two tilted solenoids provide a pure dipolar field.

“This is the first time a magnet like this will be used in a high-energy physics particle accelerator,” says Gijs De Rijk, who is in charge of the magnet laboratory building the corrector. “Its design was proposed at the end of the 1960s and later industrialised in the US. A prototype for proton therapy is currently being built at Lawrence Berkeley National Laboratory, but this is the first time it will actually be used for the high-energy application initially foreseen by the original article of the 1960s,” he explains.

Even though this design requires about 50% more conductor than normal sector coils, this should be compensated for by the simplicity of the construction. “This magnet has 10 drawings instead of 100, so fewer components and less tooling to assemble – in the end, we believe that it will be a less expensive and more reliable magnet,” explains Glyn Kirby, the engineer in charge of the magnet’s development.

In the HL-LHC, two 2-metre-long canted cosine theta magnets will be positioned near the insertion region of the ATLAS and CMS experiments and will be used as corrector magnets. Indeed, in addition to the dipole and quadrupole magnets that guide and focus the charged particles, corrector magnets are used to cure imperfections in the magnets and compensate for alignment errors. These magnets, made of niobium-titanium, will also be used to open the crossing angle between the two beams after the collision to avoid parasitic collisions in the detectors.

Scientists at the Lawrence Berkeley National Laboratory in the US are also exploring the applicability of this concept for higher-field magnets based on niobium-tin (Nb3Sn), approaching the 10 T barrier. Recently, the Paul Scherrer Institut in Villigen, Switzerland also joined this effort. The coming years will see significant R&D efforts on the tilted solenoid design.