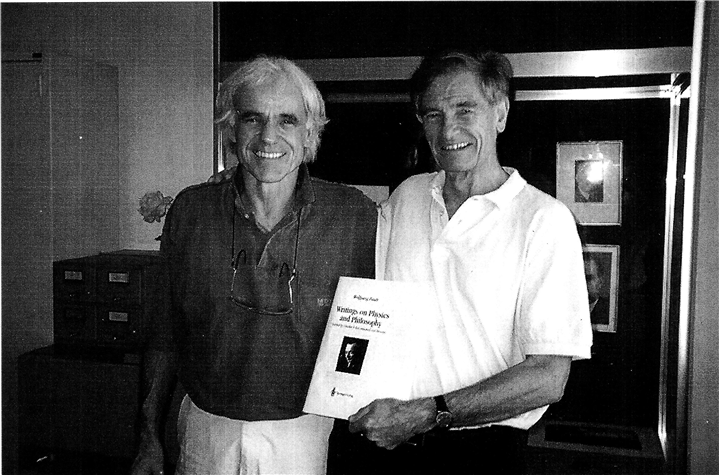 Karl Von Meyenn (left) with Charles Enz of Geneva, who is holding a copy of Pauli's “Writings on Physics and Philosophy”, published under the auspices of the Pauli Committee at CERN, of which they were both members. (Image: CERN)

It was with great sadness that we learned that physicist and science historian Karl von Meyenn passed away on 18 June 2022 in Neuburg an der Donau, Germany. Karl was associated with CERN for many years, and could often be found in the Salle Pauli, the archive and library of Wolfgang Pauli, on whom he was one of the world’s leading experts.

Karl was born in Potsdam, Germany, in 1937 and began studying physics in Chile, where his parents emigrated. He completed his doctorate in 1971 with Professor Siegfried Flügge in Freiburg im Breisgau, then returned to Chile with his wife to teach at the Pontificia Universidad Católica until the military coup of 1973. Back in Germany, he first worked as a senior assistant to Professor Helmut Reik at the Faculty of Physics in Freiburg, before specialising in the history of science with Armin Hermann at the Historical Institute of the University of Stuttgart in 1975. From 1985 to 1990, he was a history of science professor at the Universidad Autónoma in Barcelona, then he joined Professor Hans-Peter Dürr at the Max Planck Institute for Physics in Munich. He also carried out research at the Institute for Theoretical Physics (with Professor Frank Steiner) at the University of Ulm, and at CERN, where he devoted himself to the scientific legacy of Wolfgang Pauli.

Franca Pauli donated her husband’s scientific writings, library and other items to CERN during the 1960s and 1970s, and CERN took responsibility for safeguarding and providing access to this valuable collection. The Pauli Committee turned to Karl von Meyenn, who had lectured and published on many great modern physicists during his career. Karl tracked down copies of other letters in public or private ownership, then collated this wealth of material into publishable form. Karl’s in-depth study of Pauli’s unpublished writings, including that of restricted items held at the ETH Zurich concerning the physicist’s relationship with Carl Gustav Jung, gave a unique insight into the progression of his ideas, which Karl also unveiled in his masterly edition of Pauli’s letters. Karl shared his knowledge of Pauli’s life and work with a friendly generosity, frequently providing a stream of entertaining anecdotes.

Besides eight monumental volumes of Pauli correspondence, Karl published a biographical anthology of the great physicists (Die großen Physiker) in 1997–1999, a two-volume selection of Erwin Schrödinger's correspondence in 2011, and numerous essays, lectures and collaborative books on individual scientists and their contributions to the development of new concepts in physics. In 2000, he was awarded the Marc-Auguste Pictet Medal of the Société de Physique et d'Histoire Naturelle de Genève for his work on the history of modern physics. Since 1994, Karl had been a member of the Pauli Committee and, from 2006 onwards, he also served as an honorary councillor at ETH Zurich. The library he leaves in Neuburg is a testimony to his great love of classical culture and broad cultural life. Combining great learning and rigorous scholarship with an engaging curiosity and enthusiasm, Karl was a stimulating and extremely likeable colleague. He will be sadly missed.

His colleagues and friends