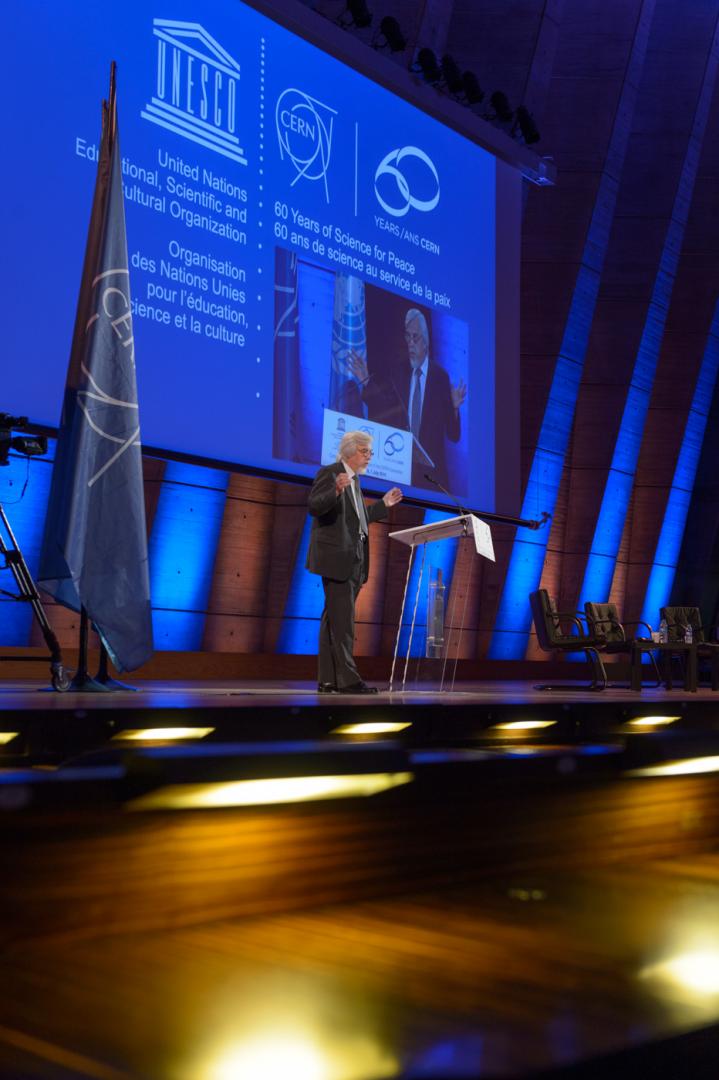 Paris, 1 July 2014. Today, CERN1 and UNESCO2 are commemorating the signature of the CERN Convention at UNESCO’s Headquarters in Paris and thereby celebrating 60 years of science for peace. The Convention that led to the establishment of the European Organization for Nuclear Research in 1954 was signed on 1 July 1953 in Paris, under the auspices of UNESCO, by twelve founding Member States. The Convention entered into force on 29 September 1954, the official date of the Laboratory’s foundation. CERN was created with a view to relaunching fundamental research in Europe in the aftermath of the Second World War and 60 years on it has become one of the world’s most successful examples of scientific collaboration. For 60 years, CERN has brought together scientists from all around the globe and has provided society with numerous benefits through research, innovation and education.

“CERN’s philosophy of openness and transparency is expressed in its Convention,” emphasises Rolf Heuer, Director-General of CERN. “CERN’s commitments, as laid down in the text, to carry out purely fundamental research and to make all of its work public, have made an important contribution to the Laboratory’s attractiveness. These commitments have ensured peaceful collaboration between scientists from all countries.”

“In the light of the many successes that have defined CERN’s history, it is a great source of pride for UNESCO to have contributed to the Organization’s creation. The initiative proves that international scientific cooperation, which is at the heart of UNESCO’s mandate, is essential and should be strengthened all over the world to enable the construction of the CERNs of tomorrow,” said the Director-General of UNESCO, Irina Bokova.

The groundwork for CERN began in the late 1940s, when European scientists undertook to halt the decline of fundamental science in Europe. Europe was considerably weakened by the Second World War and had lost its leading role in fundamental research. Many scientists had fled to the United States, where increasingly sophisticated and expensive equipment for studying fundamental physics was being constructed, with the Soviet Union not far behind. These particle accelerators were completely out of the reach of any European country on its own, so cooperation was an indispensable tool for Europe in stemming the decline of fundamental research and the brain drain.

After initial discussions between scientists in the late 1940s and the first official declarations encouraging scientific cooperation in Europe at the start of the 1950s, UNESCO played a vital role in establishing the Laboratory. One of the mandates of the recently created United Nations Educational, Scientific and Cultural Organisation was “to encourage the creation of regional scientific laboratories”, so it was only fitting that CERN be created under its auspices. The eminent physicist Pierre Auger, who was the Director of Natural Sciences at UNESCO at the time, was a driving force in the negotiations which led to the creation of the Laboratory.

Starting in 1950, UNESCO organised several major conferences, during which the creation of a large nuclear physics laboratory was discussed. In December 1951, the first resolution to found a European Nuclear Research Council was adopted. The provisional council set up a few weeks later drew up the Convention for the establishment of the future Laboratory. After lengthy negotiations on the details, the Convention was finally approved on 1 July 1953 in Paris.

CERN and UNESCO have maintained close ties over the last 60 years, a relationship which has allowed them to cooperate on many projects, mainly in the field of education. At present, the two organisations are working together on projects to establish digital libraries in Africa and to train science teachers in developing countries.

1. CERN, the European Organization for Nuclear Research, is the world's leading laboratory for particle physics. It has its headquarters in Geneva. At present, its Member States are Austria, Belgium, Bulgaria, the Czech Republic, Denmark, Finland, France, Germany, Greece, Hungary, Israel, Italy, the Netherlands, Norway, Poland, Portugal, Slovakia, Spain, Sweden, Switzerland and the United Kingdom. Romania is a Candidate for Accession. Serbia is an Associate Member in the pre-stage to Membership. India, Japan, the Russian Federation, the United States of America, Turkey, the European Commission and UNESCO have Observer Status.
2. http://en.unesco.org/