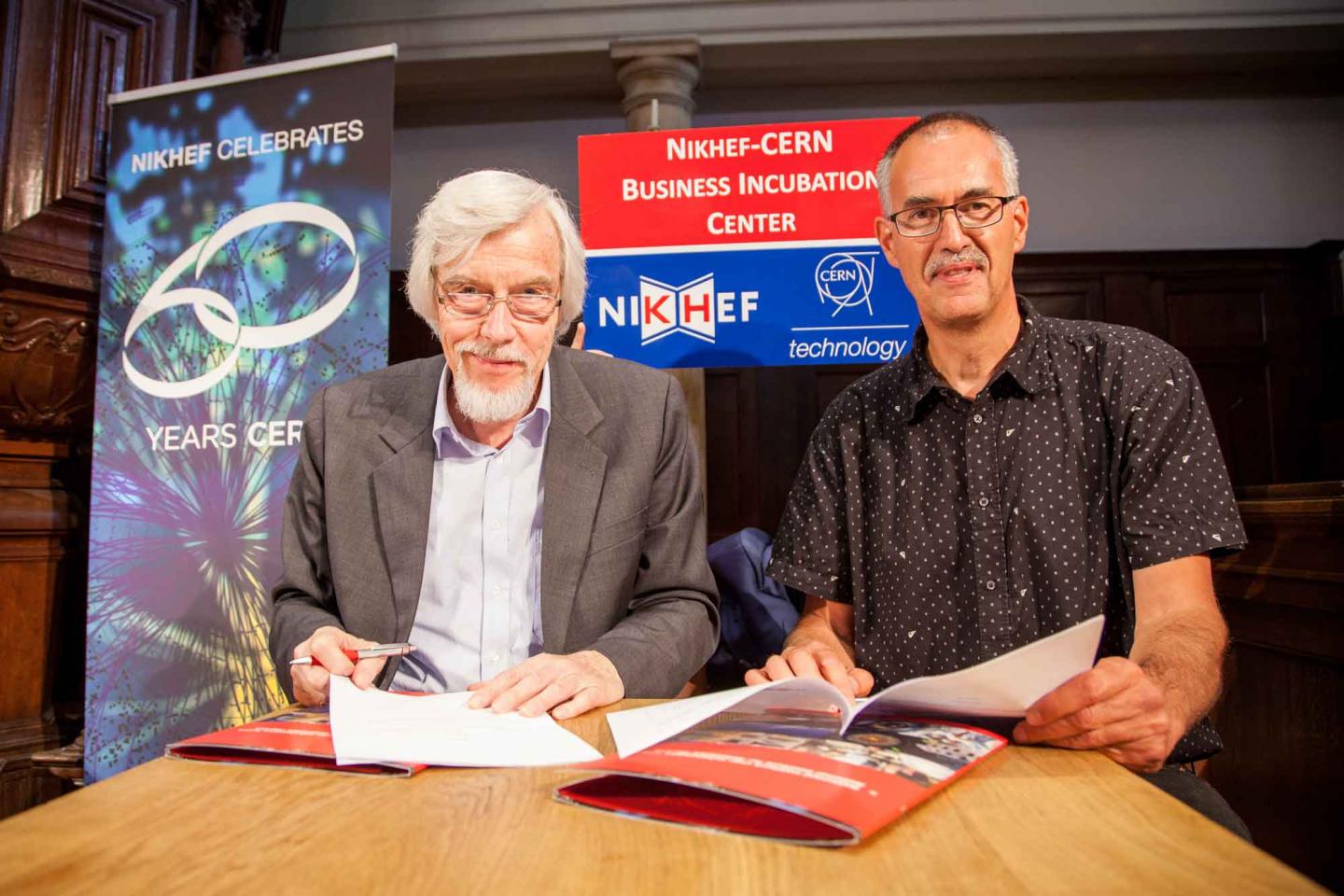 Geneva 26 June 2014. CERN1 along with Nikhef2, the Dutch National Institute for Subatomic Physics, today announces the opening of a new Business Incubation Centre (BIC) hosted at the Amsterdam Science Park, where Nikhef is located. The centre will provide new technology transfer opportunities to bridge the gap between basic science and industry, supporting businesses and entrepreneurs in taking innovative technologies related to high energy physics from technical concept to market reality. The announcement was made on the occasion of a symposium in Amsterdam organized by Nikhef to mark CERN’s 60th anniversary and highlighting Dutch contributions to the advance of fundamental physics and related technologies.

“It is particularly encouraging to see the Nikhef-CERN Business Incubation Centre established here, in the heart of one of Europe’s successful science parks,” said CERN Director General, Rolf Heuer. “Through schemes ranging from R&D partnerships to licences and consultancy, CERN is fully committed to streamlining the passage of technology from basic science to industry, and this development will surely help to make that happen.”

“Subatomic physics is a gold mine of innovation. Already Nikhef has spun out several companies that have CERN related technology inside, such as Amsterdam Scientific Instruments, Omics2Image, and Sensiflex, respectively developing photon detectors, mass spectrometry and alignment technology.” said Nikhef director Frank Linde. “The Nikhef-CERN Business Incubation Centre is an important contribution to the current mechanisms ensuring that innovations from fundamental science enter the market in as short a time as possible.”

The Business Incubation Centre will support the development and exploitation of innovative ideas in technical fields broadly related to CERN activities in high-energy physics such as, for example, detectors, cooling technology and high-performance computing. CERN will contribute with the transfer of technology and know-how through technical visits to CERN, support at the BIC and preferential-rate licensing of CERN intellectual property. Nikhef will provide office-space, expertise, business and fundraising support.

The collaboration between CERN and Nikhef builds on Nikhef’s incentive scheme to support entrepreneurship, and on the establishment of Amsterdam Venture Lab, an initiative of the University of Amsterdam and partners, located close to Nikhef, which provides facilities and support for early-stage research-based start-ups.

1. CERN, the European Organization for Nuclear Research, is the world's leading laboratory for particle physics. It has its headquarters in Geneva. At present, its Member States are Austria, Belgium, Bulgaria, the Czech Republic, Denmark, Finland, France, Germany, Greece, Hungary, Israel, Italy, the Netherlands, Norway, Poland, Portugal, Slovakia, Spain, Sweden, Switzerland and the United Kingdom. Romania is a Candidate for Accession. Serbia is an Associate Member in the pre-stage to Membership. India, Japan, the Russian Federation, the United States of America, Turkey, the European Commission and UNESCO have Observer Status.
2. Nikhef is a partnership between the Foundation for Fundamental Research on Matter (FOM) and four universities: Radboud University Nijmegen, University of Amsterdam, Utrecht University and VU University Amsterdam. FOM is part of the Netherlands Organisation for Scientific Research (NWO). Nikhef is located at Amsterdam Science Park.